These photos were taken during an April 2005 ghost tour of New Orleans’ French Quarter.  This was a time when the Quarter seemed especially spiritually active, a few months before Hurricane Katrina changed everything.

I can recall walking up to an artist just outside the cathedral, and telling her to be prepared to move on short notice.

I explained that I “saw” the image of her being in something like a washing machine, being agitated in the water, and needing to get out before the spin dry cycle.  I also told her that I felt certain she was going to be okay, but she’d have to get out.

At the time, I had no idea how prophetic that was.  Honestly…?  I thought the imagery was symbolic.

The night I took the following photos, we’d signed up for one of the many wonderful (and sometimes theatrical) ghost tours of the French Quarter.  On this residential street, the guide explained we were looking at a house that had belonged to the famous Voodoo (or Voudoun/Vodun) queen, Marie Laveau.

I took a few photos.  Arrows point to some of the orbs that seemed most credible to me, as I analyzed the pictures. 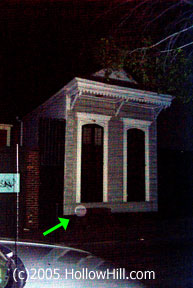 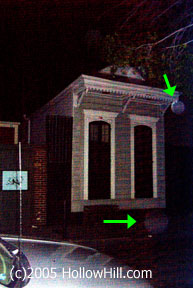 This photo was taken on a cool, dry evening in New Orleans  at about 9:30 at night.

The orbs could be humidity or a reflection, but I don’t think so.  There’s a certain feeling you get with some ghost photos… and this was one of them.

It had the look of an eerie home of a famous woman whose stories still provide New Orleans with color.  I can understand why the tour guide wanted us to believe it was Marie Laveau’s former residence.

The house may be haunted, but it’s probably not one of Marie Laveau’s homes.  I’ve researched the addresses associated with both Marie Laveau I and II, and I couldn’t find any connection to this house.

When you take any ghost tour (or vampire tour, etc.) in New Orleans, it’s important to keep your critical thinking skills engaged.  Some of the biggest legends — such as Marie Laveau and Madame Lalaurie — have become a little lost in the fictional tales built around them.

Nevertheless, this house is charming to look at, and it gave me a slight chill as if something paranormal could be associated with it.

Or, maybe the storytelling abilities of our guide were so good, I was looking for a “good scare” when what I really saw was a wonderful, historical home.