Ghost tours are popular all year ’round, and especially at Halloween.

However, their popularity has also led to some really bad ghost tours, and some shady marketing methods.

I’m aware that “good” or “bad” depends on what you’re looking for. The grid at right can help you find the right ghost tour for you.

To be sure you’re getting tickets for a ghost tour you’ll like, ask questions before you buy the tickets.

Many people are looking for the experience. Will it be scary and seem real? Or, will it be silly, ridiculously theatrical, and just for laughs?

There are audiences for both kinds of tours.

Will you be accompanied by young children on the ghost tour? You’ll probably want something that won’t give them nightmares. Choose the tours that’d fit the right side of the quadrant: Both silly and funny and obviously made-up.

Tell the tour operator if you’ll have small children with you. Ask how scary the tour could be, and how lurid the stories are. No tour guide or company wants to be sued for emotional distress that could have been avoided.

Are you on your own, or with other adults? Do you want something kind of creepy, that you’ll laugh about later, because — looking back on it — the stories were so obviously fake?

Ask (a) if the tour is scary at times (does anyone scream), and (b) if it’s “all in good fun,” and folklore more than serious stories of tragedy.

Tip: No tour operator wants to be asked if the stories are “fake” or if the tour is “ridiculous.” They’ll respond better to words like folklore, colorful stories, lots of laughs, and so on.

On the other hand, if you’re looking for something genuinely terrifying with real history — London’s Jack the Ripper Walk comes to mind — ask the tour operator if the tour is okay for small children. If they reply with a firm “no,” that’s probably the tour you’re looking for.

Also, if you’re expecting some genuine ghost hunting experiences, ask if the stories are all real and if they were researched academically. The term, “academic,” will usually put off anyone with fake stories.

I’m not popular on some ghost tours in New Orleans’ French Quarter.

They usually pause at the LaLaurie Mansion and talk about Madame LaLaurie screaming at her slaves in a French accent. At that point, I tend to remind the audience that Madame LaLaurie’s husband was French-speaking. She was actually the daughter of Irish immigrants. If she had an accent, it probably wasn’t French.

And, if the tour guide points to a window on the third floor and describes the (probably fictional) horror of the little slave girl leaping to her death, I often blurt that the third floor didn’t exist when Mme. LaLaurie lived there. The third floor was added later.

Fake tours don’t like people like me in the crowd. If you’ve already done some historical research about the locations along the tour, they won’t like you, either.

Many of the best ghost tours are somewhere between fun and scary, and mix researched history with some credible folklore.

Use the quadrant above to decide exactly what you’re looking for. Then, be sure to ask appropriate questions. 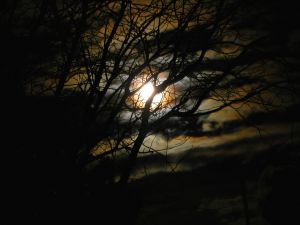 Recently, I spoke at the Central Texas Paranormal Conference in Austin. During the event, I chatted with another speaker at the event, Dash Beardsley (owner of Ghost Tours of Galveston).

For many years — probably since 1999, when his tours were launched — I’d heard great things about them. According to reports, his tours are the second most popular ghost tours in the United States. (New Orleans usually claims the #1 spot for ghost tours.)

So, he knows a thing or two about ghost tours.

Dash shared some insights about the darker side of the ghost tour industry… and not the fun kind, either.

New ghost tours are trying to cash in on the reputation of established (and well-liked) ghost tours. They’re copying the names, just enough to confuse visitors. So, when you’re looking for Ghost Tours of Oshkosh (Wisconsin), you might see a list like this:

(That’s a made-up list. I have no idea if Oshkosh has ghost tours, or what they’re called.)

That name game is why you need to ask questions before you take the tour. And, if a friend recommended a tour to you, get all the details from him or her, so you know exactly which tour to take.

Whether or not you’re on the tour you’d expected, you usually know — within a few minutes — if it’s the right tour for you. If it isn’t, discreetly let the tour guide know that you’re leaving the tour and you’d like a refund.

The problem is: Some tour companies give no refunds for any reason. Ask what their refund policy is, before you buy your tickets. (Most honest tours will refund your money in full, as long as you leave the tour within the first half hour or so.)

But, by the time you realize it’s not the right tour for you… it may be too late. If you’re only in town for that night, it’s probably too late to join the tour you wanted, and your evening was wasted. Don’t let that happen. Always ask questions before the tour starts and before you buy tickets.

Plan ahead for the best ghost tour experience

As you can see, planning ahead — asking the important questions — can make all the difference. It’s especially important if you’re looking for a particular kind of ghost tour: Something safe for little kids, or something with perfect historical accuracy. Print this article and use it as a guide when you’re shopping for the best ghost tours.

And, if you’re in the Houston or Galveston area…

If you happen to be around Galveston, be sure to take one of Dash Beardsley’s tours. He’s a colorful guy (and an impressive musician – he played some of his music during the conference) and his tours are internationally famous.

Here’s the link: Ghost Tours of Galveston (And, for the record, Mr. Beardsley did not ask me to mention him, his tours, or even his music.)