This is an odd gravestone. It’s unique because I can’t find a reasonable explanation for it.

Gilson Road Cemetery in Nashua, New Hampshire is eerie enough. However, this early 19th-century headstone has a hole in it. The marker is very old slate and the hole is like something drilled, not a bullet hole.

The stone is old and dry. There are no cracks radiating from the opening to suggest that anything impacted it. The back of the stone is not fragmented in chunks as it would be from a bullet. No other headstones or signs in the area have been shot.

Here is a b&w photo showing the opening in the stone: 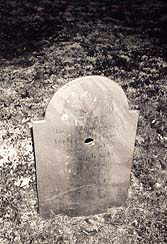 And here is a close-up of the opening: 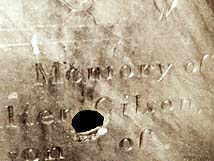 That’s lichen on the inside edge of the opening, not highlights.

The surface is quite smooth, especially considering that the stone is rugged and ancient slate.

People who’ve examined this headstone on site, believe that the hole was probably drilled. But why…?

The lettering doesn’t go around the hole, so the damage occurred after the stone was carved.

And, the stone is in the middle of the cemetery, so — even if we could explain this as a careless shot by a vandal — the stone is too far from the road for that to make sense.

This cemetery more than earns its creepy reputation.