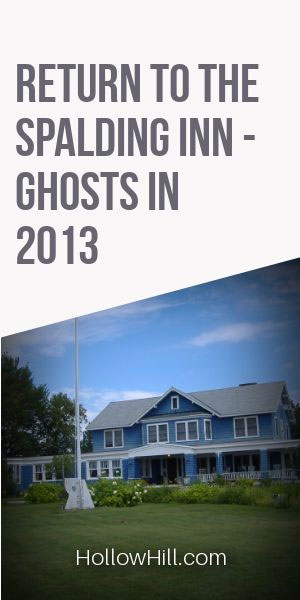 In April 2013, I visited the Spalding Inn for a ghost hunting event hosted by Jason Hawes.

It had been about two years since I’d last investigated the hotel.

Frankly, my earliest overnight visit to the hotel – in 2008, before the hotel opened – was alarming. Whatever I encountered there, it wasn’t just ghosts.

I’m in my comfort zone with ghostly phenomena. When weird things happen that I don’t understand, I get anxious.

So, I generally visited Jason & Grant and their families during the daytime. I liked sitting on the hotel porch, laughing and chatting about our adventures.

Then, in 2013, knowing that my husband and I were moving soon, I went back to the Spalding Inn to participate in one of Jason’s ghost hunting events.

The ghostly energy confirmed what I’d discovered with my NH ley line map, shown later in this article.

But before I explain the ley line map, here’s what happened during my 2013 investigation.

The upper floor of the Spalding Inn’s carriage house seemed just as strange, but more had focused energy.

That is, many of us (including me) didn’t encounter the usual off-the-wall weird energy there.

It was as if whatever’s there had a purpose for being there.

If you weren’t useful to the ghost, and whatever his or her goal was, the ghost wasn’t around.

However, some investigators experienced profound encounters and spiritual confirmations.

Those seemed to be very quirky – and somewhat conflicted – experiences.

Also, the spirits (ghosts, energy, whatever) at the main level (ground floor) of the Spalding Inn’s carriage house were far more responsive to the various electronic devices in use.

Kris was eager to talk about the ghosts

During that 2013 visit, Jason Hawes’ wife, Kris, shared many stories.  They were fascinating, because she was describing encounters that complemented mine.

Generally, Kris seemed more eager to talk about the hotel’s ghosts than Jason was.

But, I appreciated Jason’s decision to say less. As a high-profile ghost hunter, he needed to remain as objective as possible. Or perhaps he didn’t want to prompt visitors, but let them make their own ghostly discoveries.

I’d visited the hotel late in 2008. That was immediately after the Ghost Hunters International team investigated, but before the hotel was officially opened. 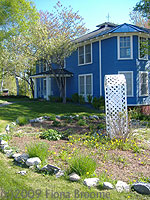 At the time, I preferred to keep a low profile. Another guest at the hotel was eager to claim the spotlight, and I was happy to let him do so.

Also, unless asked for details, I usually keep many of my observations to myself. I like to think about them for a few days.

That gives me time to evaluate my experiences, away from the turbulence of the hauntings.

So, I didn’t talk much about what I’d seen and felt at the hotel. It included:

Then there was the figure that was dragging itself along the floor in the main building. And the haunted mirror on the first floor. And finally – back in the coach house – the completely unplugged old-school phone with the “call waiting” light blinking.

I may write more about this, later.

Oh, I slept soundly at the hotel. But what I witnessed during my investigations…? It was one of the strangest combination of phenomena I’ve ever encountered.

Five years later – in 2013 – Kris Hawes confirmed many of my experiences, without knowing about them ahead of time. After all, I’d never said much about them.

I was delighted. (And a little creeped-out, if I’m honest, especially about the unattractive figure crawling on the floor.)

As of 2013, it seemed like the ghosts were learning from visitors. The ghosts’ responses were more specific, more consistent, and involve more senses.

In other words, the Spalding Inn had become a more useful research location.

In 2013, in the main building, the dining room felt like more of a “safe haven” from intrusive ghosts.

That was a relief. We could get away from the entities… whatever they were.

But, the perimeter pf the dining room was odd. It was like walking through spiritual jello, if that makes sense.

The extended corridor (where the sleeping rooms are) was far more active than it had been.

Previously, I’d categorized most of the activity there as fae and perhaps Native American, not ghostly.

Now, several ghosts in that hallway – and sleeping rooms along it – seemed interested in contacting us.

(I’m not sure what words to use for that. Maybe those ghosts were there all along, but fairly silent. Maybe they’d migrated to that part of the hotel, where they had a bigger audience. I have no idea.)

It was time to sell the hotel

As we chatted in 2013, Kris confided that Jason and Grant were thinking of selling the hotel.

The hotel’s massive repairs had cost far more than Grant and Jason had expected. Competing with neighboring hotels – that offered more amenities for seasonal tourists – was a challenge.

And, I think Jason and Grant had started out with a different vision for the hotel.

I told Kris that selling the hotel was a good idea.

I did not tell her that – during that 2013 investigation – the energy at the hotel seemed angry.

It was a somewhat nasty, drain-everything-from-you kind of energy.

This wasn’t just a spiritual attack.

I had no doubt the malicious energy wanted to destroy the hotel’s business, crush morale, and generally tear things up.

I was happy not to spend another night there.

Why did the energy change?

Maybe the ghosts didn’t like the idea of dealing with yet another set of owners.

Or maybe the ghosts had enjoyed the attention of Jason & Grant’s ghost hunting overnights.

I’m glad Jason & Grant and their families sold the hotel. I wish the new owners very good luck with it.

And yes, I’d cheerfully return there, out of curiosity. I’d love to see if the ghosts and other entities remained there. 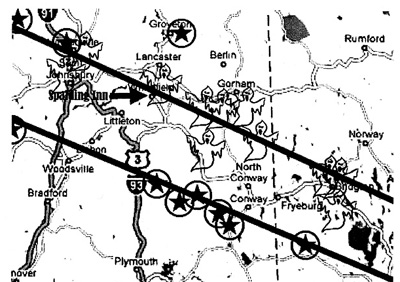 For the 2013 event, I’d created a special information sheet that featured ley lines at and near the Spalding Inn. It also showed “hot spots” in northern New Hampshire in general.

The illustration is at right. If you draw these lines on a larger map, you can see where they extend into other states. All locations along the lines are worth exploring.

The ghost figures indicate locations where ghosts have been reported. The star-in-circle marks indicate other paranormal reports (UFOs, etc.) and anomalies.

If you’re researching in NH, check sites on either line.