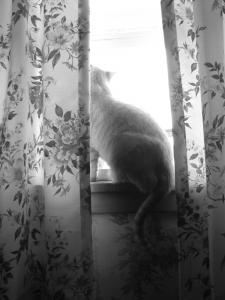 Several people have asked if a recently departed family member or friend might be a ghost.  (A few have asked if a pet can return as a spirit. Yes, I believe pets are as much “family” as their human companions are.)

The following is part of my reply to a reader whose mother had passed away and now seems to be returning — as a spirit — to the home where she lived.

My personal experiences and my work in this field lead me to believe that people definitely can (and often will) visit friends and family after passing on.In most cases, it’s not necessarily anything negative.  The person has an interest in those who are still living in this plane of existence.  Or, the person has something to communicate.  Maybe the spirit is simply having fun… which can be received a variety of ways, depending on the spirit’s sense of humor.

The intensity and duration of these experiences seem to diminish over time.  My mom visited me for several weeks after she passed away. Then, she was gone for awhile.

A month later, she showed up at an event where I was speaking, in a country she’d barely visited. She spoke very clearly to me — in her own voice, across a room — through Christopher Moon’s “Telephone to the Dead” (aka, a “Frank’s Box”).

I’m not sure which among us was more amazed when that happened… including my mother, who seemed a little intimidated by the device.

Generally, when a spirit is around you, I think it’s polite to talk out loud to her (or him) as if you could still see the person.  After all, it’s still the same person, and nobody likes to feel ignored.

If she’s doing anything that you like, say so.  If she’s making you uncomfortable, talk about that, too.

Though spirits seem to retain their basic personalities — and sometimes an occasional eccentricity or habit — they seem to recover a lot of their mental abilities from before they were injured or became ill.

Forgetfulness seems to be common. I think that’s because the spirits are discovering a very cool, exciting new realm. They forget things because there’s so much to learn and explore.

I don’t think spirits retain any limitations from their earthly lives… not unless they still feel defined by them. That can change as they get more used to their new lives.

Of course, all of this is my interpretation of what I’ve experienced, and what I’ve learned from others’ stories.  Some of my conclusions may be wrong, but… well, they work for me.

In any potential haunting or visit, the most important thing is to treat the spirit as if he or she is still alive… because, after all, the spirit is. Don’t ignore it or be frightened of it.

Talk normally, explain how you feel about the visits. Behave as if you’re talking to them on the phone but the connection isn’t perfect.  Let them know that they can probably hear you just fine, but you can’t hear them clearly.

It’s nothing to be frightened or worried about.

In fact, I think it’d be very strange (and frankly not fair) if people passed away and could never return to visit friends, family and places they most loved.

I hope that helps.

As I said in that email, this is just my opinion about one very normal type of “haunting.”  I might be wrong, or it may not apply to all situations.

Start with the idea that spirits (and ghosts) are normal, not scary or dangerous.  Movies, TV, books, stories and even some websites have sensationalized visits from the other side… aka “hauntings.”

The only time a haunting is a problem is if it’s a significant issue for you or for the spirit that seems to be lingering here.

Otherwise, I don’t think there’s anything odd or unusual about someone visiting friends, family, or favorite places.  In fact, it’s rather nice.

One thought on “When a Loved One Might Be a Ghost”