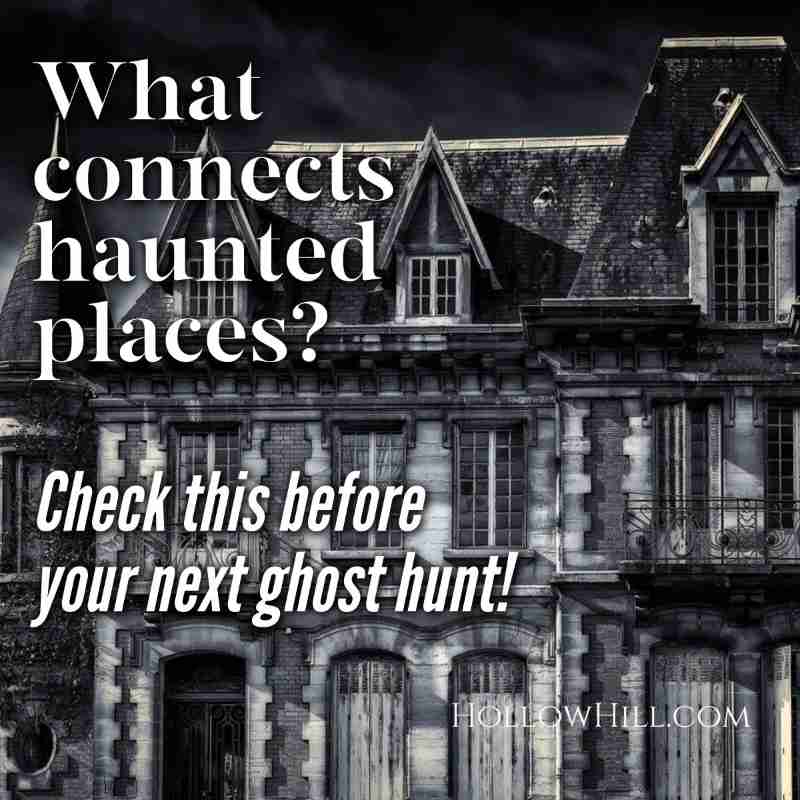 Are some haunted sites connected? Is there a way to confirm or even predict when and where a house might be haunted?

The answer may surprise you.

Yes, many haunted sites have eerie connections… but you’ll need to know what to look for.

Before every new investigation, here’s what I do

Sometimes, the  patterns and connections between haunted sites is a tipping point.

That’s especially true in cases such as the ghosts of Eden Camp Museum, in Malton, England… where I had no “ghost stories” to start with. (Online, I found zero reports of ghosts there, before the Most Haunted episode.)

Just as I’ll usually like a new acquaintance if we share a common interest, it seems as if many of the most haunted sites share connections, too.

One of those haunted connections – perhaps the easiest for me to verify – is energy lines, or “ley lines.”

Are ley lines real? I have no idea. Among serious ghost hunters, ley lines are controversial, to put it mildly.

However, if I find a straight line connecting three or more anomalous locations, it seems to increase the likelihood that their ghost reports are accurate.

The process is simple. I’m literally “connecting the dots” on a map.

I take out a map, a pen, and a ruler, or I use Google Maps. (And yes, I have a transparent ruler that I hold up, against the screen.)

In just a few minutes, I can see if there’s a geographical connection.

But, it’s important to note nearby anomalous locations, not just haunted places.

One example is the “Judges’ Line” I found in Salem, Massachusetts.

Some of those locations report ghosts. Others are just sites with odd (“anomalous”) histories and connections to the Salem Witch Trials.

Later, in northern New Hampshire, I found two distinct ley lines. Along one line, nearly all reports were about ghosts and hauntings.

Along a parallel line, most reports were about Bigfoot and other eerie creatures.

I don’t know why ghosts – and crypto critters – seem to favor one line more than another.

Whatever the explanation, ley lines seem to indicate something related to paranormal activity. That’s why I check them first, in lieu of credible ghost stories.

Ley lines aren’t the only pattern I look for. They’re just the easiest to check in most cases, not necessarily the most important.

Of course, my Salem “Judges Line” relied on geography and history, to determine that ley line.

When I’ve found ghost stories related to a site, I’ll check them right away – sometimes, even before I look at ley lines.

Perhaps someone like King Henry VIII or Lord Byron apparently haunts a hotel. I’ll see if history supports a connection between the individual and the location.

Fortunately, between great libraries and the Internet, I can usually determine the likelihood of that connection. (Of course, some research can be challenging. At either extreme – an obscure person or a famous one – stories can be difficult to verify.)

Of course, the best confirmation of a ghost is to witness the activity, on site. So, if a site is convenient or especially intriguing, I may investigate it, even if the ghost stories seem more like fiction than fact.

When I investigated Edith Wharton’s lovely home in Massachusetts, I thought I heard her ghost – speaking in French – saying unattractive things about her husband.

One of the staff confirmed that Ms. Wharton regularly spoke in French, and – at times – did not seem to like her husband very much.

Having that confirmation made me feel better about claiming the site is haunted.

Sometimes, it’s easy to dismiss a ghost story without going near the site.

In New Orleans, the story of Madame LaLaurie throwing a slave girl from a top floor window…? That floor wasn’t even part of the house when the LaLauries lived there. And, I’ve been assured – by someone who lived in that mansion building for years – that the site’s ghost stories are vastly overrated.

However, don’t rush to judgement.

Despite what seems to be a fictional backstory for the Myrtles’ ghosts, I’ve witnessed a wide range of weird and paranormal phenomena there. Had I evaluated the site solely on its history, I might have missed a great night of ghost hunting.

Folklore and Other Patterns

In ghost research, I look for many other patterns, as well. Here are a few:

A house built on a Native American sacred site or burial grounds…? It’s probably haunted, but I always verify that history. In the late 20th century, “Native American burial sites” seemed the default excuse for a haunting, even when there was no evidence of Native Americans in the area.

Often, that’s just lazy research. The site may still be profoundly haunted, but take the “burial ground” legend with a grain of salt. (In some cases, literally. <– Yes, that’s a ghost hunting joke, related to using salt as a defense against malicious entities.)

Any house that used to be a funeral parlor – or any place where dead bodies were, for any length of time – is likely to have a ghost story.

The Lizzie Borden house is one. If you investigate the basement of the house, and look for evidence of blood, you’ll find it. That’s because Mr. Borden owned a casket business, and sometimes worked with dead bodies in the basement. Related rumors were – and still are – grisly. (Hint: unusually tall bodies, and standard-sized caskets. Ick.)

Not all cemeteries have ghosts. Only about 1/4 of the “haunted” cemeteries I visit seem to have ghosts. So, before taking the time to investigate one, I look for specific things.

If they moved some (or all) bodies from a cemetery to another location, the old (supposedly empty) cemetery is probably haunted.

For example, they moved the Salem “Witch House” back from the road, to where it sits now is. But part of the land used to be a cemetery for the church next door. Someone who worked for the church explained that they never were sure if they found all the graves, before they settled the house in its new location.

If a cemetery has many unmarked graves, the cemetery is probably haunted.

Gilson Road is still one of the most reliably haunted sites I’ve ever investigated. 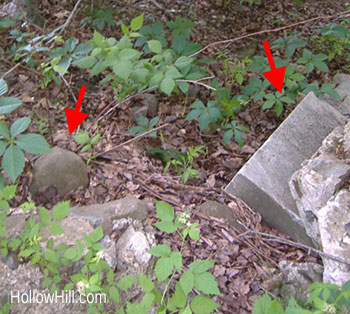 At Portsmouth South Street Cemetery (Portsmouth, NH), some gravestones seemed tossed into the nearby woods.

The photo at right shows two.

And, of course, that cemetery is haunted.

Those are just a few things I research before scheduling an investigation.

When I find multiple connections – ley lines and history and one of the four features of most hauntings (money, power struggles, drama, and tragedy) – odds increase that the site really is haunted.

If I find no connections – not even history supporting the ghost stories – I expect very little activity at the site. I may even decline to investigate.

However, sometimes I’ve been convinced that a ghost report was a hoax…  and then realized I was wrong. Really wrong.

Bradford College (Bradford, MA) was a good example of that.

They were a yawn.

But, as a favor to a friend, I investigated the college anyway. And, as my articles explain, the site was very haunted.

In fact, some of the eeriest places I’ve visited were those with ghost stories I’d dismissed as hype and urban legends. (Would they have been as creepy if I’d arrived, better prepared to encounter ghosts? Maybe not.)

In recent years, people have asked me to investigate many locations… more than I have time to visit. I’ve learned to use patterns and connections – geography and history – to select the most promising research sites.

I don’t put all my trust in things like ley lines, history, or folklore.  But, however silly and pseudo-scientific those connections may seem to some people, they often indicate whether a site has ghosts.