On the northeast side of Portsmouth, at New Castle, a grand Victorian hotel overlooks sailboats, fishing boats and yachts.

For generations, the Wentworth Hotel, also called Wentworth-by-the-Sea, or “Hotel Wentworth,” was a summer destination for wealthy families.

Built in 1874, this hotel was synonymous with ‘opulence’ through the 1960s. However, times changed and – by the late 1970s – the next generation showed less interest in their parents’ vacation choices.

As a guest during the waning days of the Wentworth’s popularity, I encountered some of the hotel’s ghosts.

An Encounter with a Wentworth Ghost

At that point, the fourth floor was dusty and abandoned.

Decades earlier, it had housed servants. Usually, they were a mix of English and Irish immigrants. They’d arrived with affluent families staying at the hotel.

But, by the late 1960s, the fourth floor was strictly off-limits to small children… which was exactly why I went there.

I’d sneak off when my parents were busy with golf lessons, formal afternoon tea, or while they were swimming laps at one of the hotel’s pools.

After waiting until she was near the top of the dusty stairs, I followed her.

But, at the top of the stairs, she’d vanished.

I thought she’d slipped into one of the tiny servants’ rooms on that floor, but I couldn’t find her anywhere. I roamed from one room to the next, noting torn floral wallpaper, rickety wooden chairs and sagging cots.

Eventually, I realized that the only footprints in the dusty hallway were mine.

That was the first of many encounters with ghosts on the fourth floor and the turrets of the Wentworth Hotel.

Every summer, I explored the “off limits” areas of the hotel. Now and then, I’d see an odd flickering light or shadow. Sometimes, I’d see translucent apparitions, and follow them. But – always – they’d vanish.

Those ghostly encounters are among the reasons I developed a lifelong fascination with ghosts and haunted places.

A Return to the Wentworth Hotel

In February 2008, I returned to the Wentworth. I was taking pictures and double-checking my stories for Weird Encounters, the sequel to the book, Weird Hauntings. (As I did in Weird Hauntings, I’ve described some of my favorite first-person tales of real ghosts.)

Entering the front door of the Wentworth hotel was like returning home. It took me a minute to get my bearings. The hotel has been remodeled at least once since I was a guest.

But, because I’d spent so many childhood summers at the Wentworth, I had no trouble finding my way back to the fourth floor and its cozy rooms.

Today, they’re not dusty little rooms any more.  The Wentworth is a Marriott hotel, so the fourth floor is as opulent as the rest of the resort.

Still Haunted… but only by the very best ghosts, of course

On the fourth floor, I could feel that familiar, homely ‘ghost feeling’, especially at the staircase landings near the hallway ends.

Twice, I saw figures appear and vanish, but perhaps that’s because I expected them. One was a man dressed in black tie formal attire… or he may have been a butler or valet.

The other figure seemed female, but I didn’t see more than a filmy outline that disappeared in a split second.

It may have been coincidence that the door to one of the most haunted rooms was unlocked and unoccupied during my visit. 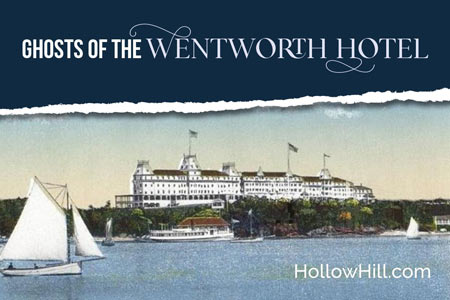 To me, that suite of rooms feels happily haunted, perhaps by a man of the sea.

He’s a loner. He won’t bother anyone who doesn’t welcome his presence.

I had the idea that he was pleased that I remembered him, and left the door open.

I didn’t see anything, but I smelled the faint aroma of good pipe tobacco.

I said that I was glad to see him.  But, of course, I didn’t actually see anything unusual. It just seemed the polite thing to say.

After that, I left… with a smile. The Wentworth is still a sort of “second home” for me, and my memories are happy ones.

In the future, I’ll return to the Wentworth. On this short tour, I was able to confirm that the ghosts are still there. There’s something very comforting about that.

9 thoughts on “Wentworth by the Sea, NH and ME – Ghosts Revisited”