Walpurgis Night – The Other Halloween

Many ghost hunters think Halloween is the only night when “the veil is thinner between the worlds.”

The last night of April can be equally spooky. In fact, I think it’s one of ghost hunting’s most overlooked opportunities.

It is exactly six months from Halloween, and it can be just as good for ghost hunting.

The last night of April is the eve of the feast day of Saint Walpurga, also spelled Walburga and Waltpurde (c. 710 -779), who was born in Devonshire, England.

During Walpurga’s childhood, she was educated by the nuns at Wimborne Abbey in Dorset. (Sites around Wimborne have many ghost stories. Knowlton Church may be one of the most famous; see my “for further reading” links, below.)

Walpurga traveled to Francia (now (now Württemberg and Franconia) with two of her brothers. There, they worked with Saint Boniface, her mother’s brother. Eventually, Walpurga became an abbess and, when she died, she was buried at Heidenheim. Later, her remains were moved to Eichstätt, in Bavaria.

This festival is known by many other names — especially Beltane — and celebrated in a variety of ways, from the May pole to the Padstow Hobby Horse (‘Obby ‘Oss).

In Sweden, the celebration is Valborgsmässoafton, the Festival of St. Radegund of the Oats. In Finland, it’s Vappu. Other events include the Roman festival of Flora.

Whether by plan or by coincidence, many significant events occurred on April 3oth. 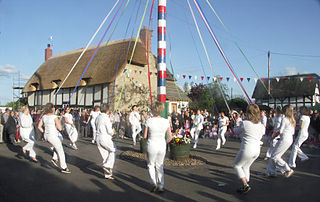 May 1st, also known as May Day, is a holiday in many countries around the world.

Among some, it’s known as International Workers’ Day or Labour Day. For many years in France, May Day was the only holiday of the year when employers must allow employees the day off.

So, in countries celebrating May 1st as a workers’ holiday, the night before is ideal for ghost hunting; you won’t need to go to work the following day.

The night between April 30th and May 1st is when bonfires lit on the peaks of the St. Michael’s Mount line — one of the best-known ley lines in the world — formed a line pointing directly towards the May Day sunrise.

(I’d spend Walpurgis Night at — and investigate — any of those peaks that are open to overnight visitors. At the very least, those sites should retain residual paranormal energy.)

And, if you want a somewhat ghoulish cast to the day, look to the Czech Republic’s čarodějnice traditions, and Germany’s Brocken Spectre celebrations.

In other words, the days (and nights) of April 30th and May 1 st have a deep significance almost everywhere around the world… and it’s been that way for millennia.

Many ghost hunters — including me — look forward to Walpurgis night as “the other Halloween.”

Ghost hunting at the end of April can be as eerie and powerful as Halloween.

In fact, sometimes it’s better, because we’re not dealing with as many crowds and party goers looking for a “good scare” at haunted sites.

For example, Salem (Massachusetts) can be practically a ghost town (pun intended) on the night of April 30th.

When the weather is good, that’s an active late afternoon (and night) at Gilson Road Cemetery, in Nashua, NH, too.

In London, England, watch the windows of the Tower buildings, after dark. I don’t think those fleeting, whitish figures are always guards.

It should be a good night to stay at the Jamaica Inn in Cornwall, England, too.

On the other hand, Tudor World (formerly Falstaff Experience, when I investigated it) is such an intensely haunted site, I’m not sure it’s a good idea to be there at Walpurgis. (Any other night…? Yes, but only if you have nerves of steel. It’s one of the weirdest haunts I’ve ever witnessed.)

And in general, around late April, fewer ghost hunting teams converge on the best haunted sites.

All in all, Walpurgis night may not have the popular, modern traditions of Halloween, but it has a very powerful foundation in history, folklore, and a wide range of spiritual traditions.

It’s not a solstice or equinox, but — in spite of that or perhaps because of that — Walpurgisnacht, like Halloween, deserves special attention.

What’s behind the mystique of Halloween and Walpurgis night? No one knows, for sure. However, both are supposed to be nights when the spirits can enter our world.

That makes April 30th as important as Halloween for ghost hunting.

When May Day falls mid-week, I add investigations at the nearest weekend, too.

I’m not certain that these kinds of festivals — Halloween and Walpurgis night — are “on-off” switches. I think the spectral energy intensifies and then wanes, for a few days on either side of the celebrated dates.

However, I might be wrong; we really don’t know why those two dates were set aside with ghostly connotations. (And why didn’t ancient people simply merge the festivals with the respective equinoxes so close to them? It’s an interesting question.)

Add April 30th to your ghost hunting schedule. I think you’ll be glad you did.

Also, for those who want more confidence in the ancient roots of April 30th, I recommend Goddess Obscured: Transformation of the Grain Protectress from Goddess to Saint, by Pamela C. Berger.

Her book references a variety of grain-related festivals celebrated at the end of April, similar to the harvest festivals of Halloween or Samhain, in the northern hemisphere.

If you have ghost hunting insights related to Walpurgis, I hope you’ll share them in comments, below.

And, if you investigate Jamaica Inn or Tudor World, especially around Walpurgis, I’d like to know how intense it was.

I’m also very interested in any hauntings in or near the former site of Wimborne Abbey. I haven’t visited it, yet, and it intrigues me.