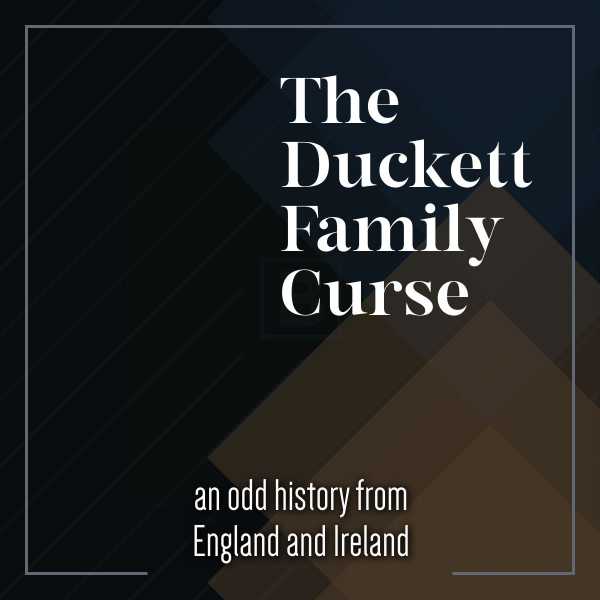 If you’re looking for a surname with an unusual history – including ghosts, banshees, faeries, and curses – the Duckett family is a good place to start.

Duckett’s Grove in Ireland was featured in a March 2011 episode of Destination: Truth, but it isn’t the only odd story associated with the Duckett family.

Duckett was known for being a persecutor of the Quakers a very new and controversial religion in that era.

One legal case involved Francis Howgill, a Quaker who’d refused to take an oath of allegiance (to King Charles II) and was sent to prison.

Anthony Duckett was one of the magistrates when Howgill was sentenced to jail.

The Origin of the Duckett Family Curse

During Howgill’s imprisonment, he was released for a couple of days to attend to some business at home.  While there, he visited Justice Duckett at Grayrigg Hall.

After the magistrate expressed surprise on seeing the prisoner, Mr. Howgill delivered this curse:

“…I am come with a message from the Lord. Thou hast persecuted the Lord’s people, but His hand is now against thee, and He will send a blast upon all that thou hast, and thy name shall rot out of the earth, and this thy dwelling shall become desolate, and a habitation for owls and jackdaws.”

Shortly after that, the Duckett family began to have problems.  All of Anthony Duckett’s male children died without heirs.  The estate failed and it was sold, around 1685, to a neighbor and family friend, Sir John Lowther.

That was around the time Anthony Duckett’s cousins began acquiring land at Duckett’s Grove in Ireland.

Both the Duckett family and Grayrigg Hall itself were equally cursed.  In the 1777 book, The history and antiquities of the counties of Westmorland and Cumberland, here’s how Grayrigg Hall was described:

Grayrigg Hall being the ancient manor house, was a strong old building, in a quadrangular form, adapted for defence more than for convenience. It is now totally in ruins, most of the lead and timber thereof having been removed to Lowther.

So, the original (and possibly cursed) Grayrigg Hall is now gone.  If you’re looking for its precise location, here are the coordinates:  Latitude 54.3711, Longitude -2.6496

Another Grayrigg Hall was built near the church.  (Don’t confuse it with the old, reputedly haunted Grayrigg.)

If you’re looking for the remnants of the haunted Grayrigg Hall, visit Lowther Castle.  As described in the 1777 book, timber and lead from Grayrigg were used to expand Lowther Castle.

The Duckett Curse Continues… with a Ghost

According to Simon Marsden’s website, Lowther Castle was inherited in 1784 by Sir James Lowther, the 1st Earl of Lonsdale, also known as “Wicked Jimmy.”

By the time of his death in 1802, Lowther’s young wife had died, he had no children, and depression had driven him to madness.  His ghost has been reported at Lowther Castle.

Here’s the full text of the Grayrigg Hall story and curse, from The Haunted Homes and Family Traditions of Great Britain, by John Henry Ingram, published in 1884.

In Ducketiana it is stated by Sir G. B. Duckett, that not a vestige remains of those extensive foundations which, a hundred years ago, attested the solidity and importance of the Westmoreland Ducketts’ residence, the Manor House known formerly as Grayrigg Hall.

A strange story is told of the last member of this opulent family, who inhabited this fine old English mansion ere it was dismantled.

The narrative has been detailed with great similarity in various works, such as Ferguson’s Early Cumberland and Westmoreland Friends, and Backhouse’s Life of Howgill, and is popularly known as “The Quaker’s Curse and its Fulfilment.”

Francis Howgill, a noted member of the Society of Friends, resided at Todthorne, near Grayrigg, in Westmoreland, about the middle of the seventeenth century.

At one time he travelled about the south of England preaching, and when he visited Bristol, in company with his compatriot, John Camm, his preaching was made the occasion of great rioting.

In 1663 he returned to his own neighbourhood, whither his reputation had apparently preceded him, for, upon arriving at the market-place of Kendal, he was summoned to appear before the Justices, who were holding a court in a tavern.

They tendered Howgill the oath of allegiance when he came before them, and as he refused to take it they committed him to confinement in Appleby jail.

It may be pointed out, as a matter of history, that in the earliest days of the brotherhood, members of the Society of Friends were often subjected to severe penalties and much persecution for their refusal to conform to the taking of judicial oaths.

At Appleby the judges of Assizes also tendered Howgill the same oath and, on his refusal to swear it, ordered him to be indicted at the next Assizes. Meanwhile they offered to release him from custody if he would give a bond for his good behaviour in the interim, but this he refused to do, and therefore was re-committed to prison.

During his imprisonment a curious incident happened. Howgill was allowed by the magistrates to go home to Grayrigg for a few days on private affairs, and in the course of the time he was at liberty the Quaker felt himself compelled to visit a justice of the name of Duckett, residing at Grayrigg Hall, who was a great persecutor of the Quakers, and was, also, one of the magistrates concerned in committing him to prison.

Francis Howgill, on this occasion, was accompanied by a friend who, over the initials “J. D.” would appear to have left a written report of the interview.

Justice Duckett expressed much surprise at seeing Howgill, and said to him, ” What is your wish now, Francis? I thought you had been in Appleby jail.”

Howgill replied to this effect, “No, I am not, but I am come with a message from the Lord. Thou hast persecuted the Lord’s people, but His hand is now against thee, and He will send a blast upon all that thou hast, and thy name shall rot out of the earth, and this thy dwelling shall become desolate, and a habitation for owls and jackdaws.”

When Howgill had delivered this message, the Justice trembled, and said,  “Francis, are you in earnest?” To which Howgill responded, “Yes, I am in earnest, it is the word of the Lord to thee, and there are many now living who will see it.”

2 thoughts on “The Duckett Family Curse in England and Ireland”