This week, I was charmed by a CBS video about informal, modern-day archaeology.

Then I realized we could do this in many haunted locations, especially private homes and businesses, where the owners ask, “Who is that ghost?”

The video is less than three minutes long. I think it’s worth viewing if you’re actively involved in private investigations.

Though this kind of dig may not confirm anything, it might give you more clues about the history of the site. That could suggest a context for the haunting.

As I see it, this is a fresh research approach. It uses a little “informal archaeology” and it’s something almost anyone can do. You can include the site owners in this project, as well. (It might mean a lot to them, even more than it does to you.)

Since this kind of research is limited to areas like closets, it won’t disfigure the more visible parts of the home or business. That’s important.

(If you can’t watch that video, here’s a link to the related article: https://www.cbsnews.com/news/childrens-workshop-school-students-dig-up-treasures-from-closets-nyc/ )

Until I saw this video, I never realized how many historical clues could — literally — fall through the cracks.

If you try this (or have, in the past), I hope you’ll share results and insights. I’m very interested in whether this could be useful.

The site in the video is about 100 years old. So, this kind of dig — with permission, of course — could be useful at sites from the mid-20th century and earlier.

My upcoming book, Paragenealogy, explains how to use historical records to correctly identify haunted places, uncover the roots of each site’s ghost stories, and sometimes help spirits with unfinished business.

Paragenealogy is the study of history related to paranormal places and events.

That history is important.

With documented history, we can understand haunted places, faerie lore and alien tales.  We can predict recurring manifestations and gain insights to residual and active hauntings.

This research involves traditional genealogical resources as well as input from psychics and folklore. Since I started ghost research in the late 1970s, it’s how I’ve evaluated ghost stories and studied haunted places.

Now, it’s the subject of a book I’m working on.

Paragenealogists start with a broad study of the location, events, and personalities that may relate to a ghost or other paranormal encounter.

Through trial and error, that focus narrows. You’ll isolate credible factors that fit the reported activity, and look closely at those that conflict.

Paragenealogy is a precise study.  If you’re a fast learner, you can learn the basics within hours. However, I’ll be honest: The most accurate research and conclusions may require years of experience in both traditional genealogy and paranormal studies.

That said, anyone can learn the basics and make important discoveries.  If your home is haunted or you’d like to learn more about a paranormal location, you can use traditional genealogical resources. They can be time-consuming to use (especially if they’re not indexed), but most of them aren’t very complicated. A beginner can dig up a lot of important and useful information.

For example, census records and deeds will tell you about the people who’ve lived in a particular home.  Vital records, where available, will fill in details about an individual, so we can compare that information with what seems to present as a ghost.

Then, you can compare “ghost stories” with what you’ve learned. Does the reported ghost seems to match for a real person? Did he or she have a good reason to be at that location… and perhaps haunt it, later?

Let’s say you’re researching a haunting at the memorial for James Sheran. (Photo at right.) A quick search of the Internet will give you a little more information.

Further research leads to this information: “The graves located in this cemetery were moved when a lake was formed on the river they obviously were working for and during the gold rush.” That means his gravestone — and, I hope, his body — were moved from their original resting place. Some spirits don’t like that, and regularly return to the new grave to be sure it isn’t moved again.

However, many markers that say “in memory of…” are just that: markers, not gravestones.

Sheran’s death was sudden and tragic, according to this description, “They were digging or panning for gold along either the Calaveras or Mokelumne river when the wet bank caved in on his friend and this Mullaney carved the stone for his companion.”

However, with just the information from Mr. Sheran’s death certificate, you’ll know a lot more about him. Using those facts, you can decide if the ghostly manifestation seems to match him, or if the ghost may be someone else altogether. (In some communities, graves were several coffins deep. So, your ghost might be someone else in the same plot as Mr. Sheran and his impressive memorial.)

If you’re working with a psychic, or you’re able to use any ghost hunting device (like an EMF meter) with yes/no questions, you may find more pieces of the puzzle. Eventually, you may identify the ghost with certainty.

There’s a lot more to paragenealogy, but what I’ve explained, above, is a good, basic start. In many cases, you can unearth the truth within hours.

If you want to know the real story behind a haunting, and the ghosts’ actual identity and history, paragenealogy is where you’ll begin. 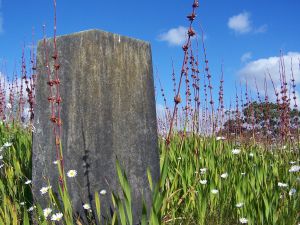 Ghost hunting often puts us in touch with tragic events from the past. Emotions can influence how we interpret cues and events related to a haunting.

However, what we think is tragic today… it might not have been so horrific in the past.

Understanding history can be essential when you are trying to:

That’s why I wrote Ghost Hunting – Keeping Tragedy in Context.  It’s a three-page report describes some harsh realities of the past.

It explains why many stories and grave markers that seem so tragic, today, may not tell the whole story or even the correct one.  Those hauntings might be related to a very different story.

This isn’t a cheerful report.  You may be shocked by some of the statistics.  But, to really understand ghosts and their stories, a glimpse into the past can be important.

Here’s my related podcast from 2012: Ghost Hunting and Historic Context