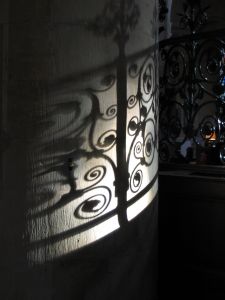 Halloween and ghosts… what’s the connection?

Most ghost hunters insist that Halloween is the best night of the year for paranormal research.  (I’d add the last night of April as a close second, but Halloween is at the top of my list, too.)

The reason for Halloween being a “best” night for ghosts, is rooted in Celtic lore.

Whether you’re talking about ghosts, faeries, or anything that “goes bump in the night,” Celtic traditions focus on “between times.”

The Celts — and several other cultures — believed that spirits of all kinds could enter our world during those “betweens.”

In more modern terms, “the veil is thinner” at those between-times.

The between-time can be dawn or dusk; both are between day and night.

It may be midnight, or the “Witching Hour,” because it’s between the calendar days.

Keep in mind that, in Celtic history, Samhain wasn’t always Halloween night… the last night of October.  It was simply the night when everyone celebrated because the crops were finally harvested, and the agricultural year was over.  So, the actual date might vary by days or even weeks.

That between-times (or between-seasons) note is the same reason why the last night of April is good for ghost hunting:  Agriculturally, it’s a dramatic change of seasons.

That night is Beltaine in Celtic countries, and Walpurgisnacht in Germany and nearby countries.  It marks the end of winter and the beginning of spring… another “between” time.

For ghost hunters, that night can be nearly as productive as Halloween.

If you’re going to make the most of those between-times for ghost hunting, you’ll stack several “betweens.”

In other words, you’ll be at the haunted location on Halloween night and you’ll choose a between time for your research:  Dusk or midnight, or the following dawn.

However, keep in mind that ghosts aren’t the only entities associated with between-times.

Faeries are also known (or notorious) for appearing then, and sometimes wreaking mischief.  So, if you see something odd, don’t immediately assume it’s a ghost; it might be something else.

Because the veil may be thinner on Halloween, you may encounter energy or phenomena that are actually on the other side.   The spirit may not actually be in our world.

This is one reason why EVP results can be better on Halloween, as well as real-time communication with the “other side.”  Cameras can produce clearer anomalies, too.

However, the increased EMF levels on Halloween night can drain batteries in your voice recorder, cameras, flashlights, etc.  (This is one reason to carry a glow-stick as a back-up light source, and a film camera as a back-up for your digital camera.)

Be prepared for anything to happen on Halloween night.  It’s the classic “between” time, and ideal for your most chilling encounters with paranormal phenomena.

Here’s Fiona’s video, explaining why Halloween may – and may not – be a good night for ghost hunting. (This is from her Ghosts101.com website, featuring answers to top ghost-related questions.) 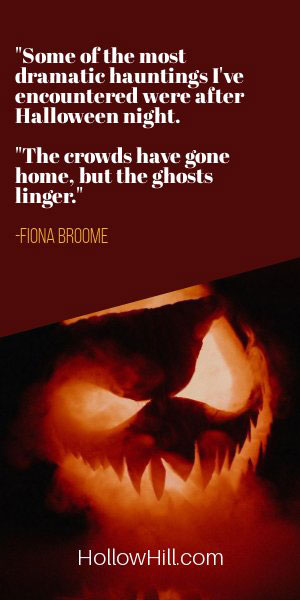 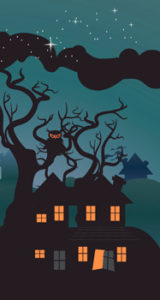