Recently, we’ve been talking about “outsiders” in history, and their connections to haunted locations.

In general, they’re at one historical extreme or the other. Either they’re infamous, or they’re practically forgotten.

In most cases, ghosts connected to infamous people – such as Jack the Ripper – are already well-known.

Often, the places they haunt have been researched by so many people, the ghostly (or psychic) energy can seem diluted.*

In my opinion, the dilution occurs when recent residual energy – from the intense emotions of paranormal investigators – remains at the site.

And, it’s one reason I’ve been a go-to person for investigators who want a haunted site that’s a little different from the usual. Or, when they seek ghostly locations near a site they’re already planning to explore.

Historical research may be necessary if you want to find fresh, intensely haunted sites. One way to simplify your research: start with “outsiders” in history, and places connected to them.

An added bonus: You can find these locations during daylight (non-investigation) hours, and with online research, as well.

To help you find fresh investigation sites, I’ve created a simplified checklist. It summarizes the main steps I take when I’m looking for a haunted site with unreported (or under-reported) paranormal activity, for my own research or for a TV show.

Here’s the link to the PDF on Google Drive: Click here to download a free copy of Finding Unexplored “Outsider” Haunts. (It’s okay to share that link with others.)

*There are exceptions to the dilution concept. Here are a few: 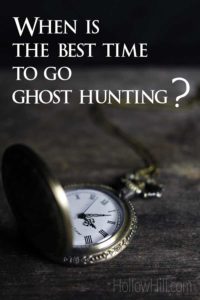 When is the best time to go ghost hunting?

Many researchers prefer to investigate after dark.

Are ghosts more active at night? I’m not sure. Maybe the darkness makes it easier for us to notice them. After all, in the dark, we have fewer visual distractions.

For me, it’s more important to investigate at anniversaries. They’re the dates when someone at that site died, or married, or something significant happened. (Birthdays can be surprisingly good days for ghost hunting, too.)

This video shares more about the best times — days and hours — for ghost hunting.

Of course, your results may be different. If you have suggestions, I hope you’ll share them with Hollow Hill readers. Leave your comments (and questions) at this site.

I’ve created a When to Go Ghost Hunting Worksheet, as well as an instruction sheet for using it.

The worksheet includes more than just times and days. I’ve also added lines for possible triggers that may improve your research results.

The worksheet instructions feature even more suggestions related to research, era cues, and other ways to enhance your investigations, specific to each location.

Here are the PDF links (on Google Drive):

You can download Fiona’s own worksheet for evaluating haunted cemeteries.

It’s free, and you can copy it (without changes) for your own use or for your team, as much as you like.

Worksheet: Evaluating Haunted Cemeteries, by Fiona Broome
You can open this worksheet and print it with any free PDF reader, including Adobe Acrobat Reader. (You probably have a PDF reader on your computer, already.)