A “real ghost story” is only as credible as the history that supports it.

When I hear a report of a significant haunting, I research the story before taking it seriously.

Here’s an overview of my research process:

1. Verify the age of the site. 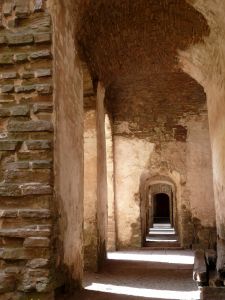 I recently researched several Irish castles.  One of them is an old building, but it didn’t become a castle — complete with tower and “Medieval” embellishments — until about 20 years ago.

Likewise, Hollow Hill has received reports that seem appropriate for the apparent age of a building, but the building is a reproduction and has no significant ghostly history.

Use those kinds of resources to learn more about an address: Who was there, what the purpose of the site was, and more.

2. Verify the history of the site.

The most famous site I debunked  may be the supposed “Ocean-Born Mary” house.

The house was old enough, but something didn’t seem right. My  research revealed that Mary Wilson Wallace never lived in the house that she supposedly haunts. She only visited it once or twice, if at all.

Likewise, if someone claims that an event took place at the site, check contemporary records. Look at newspaper reports from the time of the event, and verify the locations or addresses.

I often hear reports including the ghosts’ names and stories.

If a story sounds a little like an urban legend, it probably is one. However, whether the ghost story sounds real or not, homework is necessary.

First, be sure that the person really existed. Birth, marriage, and death records, as well as census records, should support the ghost story.

I routinely check the free and paid resources at Ancestry.com.

However, those same census and vital records are available to the public at no charge, especially if you live in the area of the reported haunting.

Or, you can check online for helpful research materials. You’re doing genealogical research. The best single source for useful links is CyndisList.com.

For a quick search on ghosts from the early 20th century and before, I usually check FamilySearch.org. It may contain some errors, but it’s a fast way to gather information.

Before you share a “true ghost story,” be sure that there really is a ghost, and real history matches the tale.

Remember, the ghost may haunt because he (or she) had been forgotten, or he wants the story told the way it really happened.  Historical records can go a long way towards uncovering  the truth.