Florida has an interesting history, and the ghost stories to go with it.  Here are just a few haunts I’ve explored in sunny (and sometimes not-so-sunny) Florida.

I’d heard good reports of Cassadaga for ghost hunting. It has a long history of Spiritualism… and spirits. However, during my first visit, the Cassadaga did not seem profoundly haunted.

I’ll give the community a second chance, and visit Cassadaga for another investigation. Sometimes an area offers more on a second visit.

2016 update: I did return to Cassadaga, and had an opportunity to investigate a couple of buildings. Both seemed to have their own, unique spirits.

The Cassadaga visitors’ center has some good material, including free literature in their conference room (just before you reach the rest room entrances). And, it is a lovely setting if you’re in the mood for a leisurely walk, browsing New Age shops and consulting psychics.

I took many pictures at Cassadaga on a rainy day, and what’s notable is what we didn’t get on film: Orbs.

With that kind of moisture in the air, I should have had dozens — if not hundreds — of orbs. Is that an anomaly? I don’t know. It reminds me of the damp evening at The Myrtles, when Margaret Byl and I photographed no orbs at all.

If you walk to the edge of Spirit Lake towards the middle of town, you’ll see a wooded area with trails to your left. If any part of Cassadaga remains haunted, it’s probably those woods.

While you’re visiting Cassadaga, there is a cemetery just outside the town line, due west, possibly on Kicklighter Road. I had just a few minutes to visit it, and plan to return to collect more information, but — on our first visit — this cemetery seemed far more haunted than nearby Cassadaga.

Legend claims that the small, rural cemetery on Rouse Road and nearby woods are haunted by a ghost from the 1840s, Benjamin Miles, whose nightly presence is signalled by an owl screeching. Mr. Miles, often in tan-colored work clothes, was buried in an unmarked grave, and is an angry ghost.

I visited this cemetery during the day, and while my photos didn’t capture anything significant, I can confirm that there is a strong, unsettling presence there. 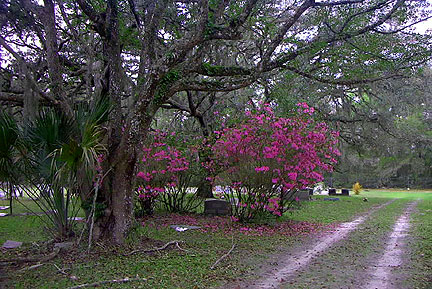 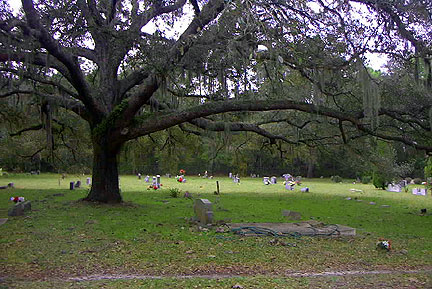 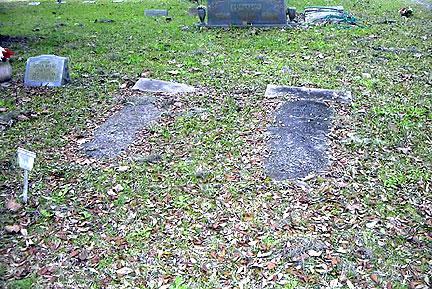 Rouse Road Cemetery is in a rural setting, between 3400 & 3621 Rouse Road, Orlando, Florida, on the MapQuest.com maps. It is a gated cemetery, and I recommend only daytime visits. Check local laws and cemetery hours before planning a night visit.

Almost every theme or amusement park has urban legends, including attractions that supposedly have ghosts. I cannot verify these tales, but include them as anecdotes:

Universal Studios theme park, Orlando: Reports of a small, hooded ghost with glowing red eyes, at one attraction.  It’s such a cliche, I don’t take that seriously.  For all I know, it was a child in an Ewok costume or something.

Disney’s Magic Kingdom: At least two different reports of ghosts at — of course — Disney’s Haunted Mansion. Also, some people report a ghost in slightly-dated clothing, strolling in front of the castle at the end of Main Street.  Pirates of the Caribbean used to have a ghost or two in the early 2000s, but I’ve heard no reports of hauntings there, more recently.

Disney/MGM Studios: At least one ghost reported at Disney’s Tower of Terror, in the lobby. Watch for fluttering movements in areas not affected by the fans.  I’ve seen that phenomenon myself, but I’m not sure it indicates anything paranormal.

If you can add more to these legends, let us know. I’m looking for first-person sightings only. (In other words, I want to know what you have seen or witnessed, not a story that you heard from someone. Thanks.)

There’s an overpass on I-4 that’s supposed to be very haunted and have more than an average number of accidents. It’s just north of Orlando, at the St. John’s River in Seminole County. According to legend, the highway was built over the graves of Yellow Fever victims, who lived (and died) at St. Joseph’s Colony, established on this site in 1887.

In the daytime, the intersection has some strange energy, but how much of that is due to it being a shabby neighborhood? (Or, is it a faltering neighborhood because it’s too haunted for businesses to thrive there? It should be prime real estate.)

If anyone has more first-person information, let us know. I do not recommend investigating this area on your own, and particularly not at night.

And, do not slow down, drive irregularly, or park on the road (or roadside) and contribute even more to the high number of accidents at this intersection.

15 thoughts on “Haunted Places in Florida”