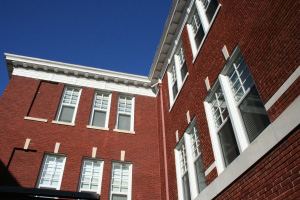 Ridiculous? Yes.  Too many stories for one large location?  Yes.  Fake…?  Maybe not.

When faced with one of these dilemmas, look at the location in general.  Why was a college (or university or other large set of buildings) put at that exact location, instead of using it for residences or retail businesses?  Or, if it’s out in the middle of nowhere (or if it was, when it was built)… why that exact location?  Why did that seem like the right place for that institution?  If the land was cheaper there, was there a reason for that?

Maybe it wasn’t a conscious decision.  The land was there and it was empty, or it was donated, or something like that.  There’s often a very good, logical reason for placing a building exactly where it’s built.

However, when that location produces lots of ghost stories — a statistically unlikely number of stories — take a look at the history of the land.  Go back to the earliest records, including pioneers, settlers, and ancient people who may have used that piece of land.  See what the history is.

When I researched the land that Gilson Road Cemetery (Nashua, NH) is on, it appeared to be ground zero for a couple of significant Native American battles.  Obviously, I can’t prove what happened on that precise plot of land, when those battles occurred.  Nevertheless, the history fits.

Sometimes, we need to accept that we may not have provable, definitive answers to why some plots of land or even acreage are haunted.  A sort-of answer might be as good as it gets.

However, the opposite extreme is to dismiss a bunch of ridiculous “ghost stories” because they’re preposterous and there are too many of them per square foot, at that location.

Between those opposite views, it’s key to examine why people might be reporting so many stories that will usually evoke a rational response like, “You’ve got to be kidding.”

I’d start with geology.  I’d look for naturally high EMF levels, as well as infrasound from underground streams.  Maybe people are disoriented and explain it to themselves (and others) using classic ghost stories.

Then, if I can’t find any normal (if odd) explanations for the reports, it’s time to examine history and what might have left an imprint on that location.

People don’t always realize why they’re drawn to a particular location, even if it’s where they’re building a school or university.  In their conscious minds, they might be thinking, “Oh, this is a lovely spot.”

On a deeper level, they might feel magnetically drawn to or even fascinated by that piece of land.  That attraction might track back to residual energy or… well, only research will explain why.

At the time, the location choice seemed logical and like a happy decision.  50 or 150 years later, increasing reports of paranormal activity may tell a different story.

The point is: Just because you’re faced with the silliest collection of ghost stories ever, don’t walk away from a site.  Go deeper.  Ask the next question, “Why are all these people telling me ridiculous stories?”

It might be contagion.  Maybe all the cool kids tell each other ghost stories, trying to one-up the previous tale. That can happen.

Or, it might be consistency that’s pointing to an unexplored history of the site.