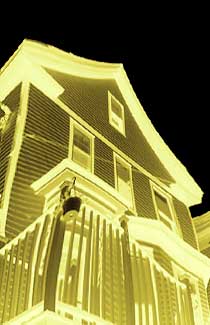 Author’s comment: My ex-husband wrote this before reading my notes about what happened.

“One night, at about 3AM I clearly heard someone coming up the stairs to the bedrooms. We lived in one of those old Cape Cod type houses, built around the turn of the century. The stairs had no carpet on them and the hallway was quite bare with excellent acoustics. I called out, ‘Hello?’ wondering if it was a burglar or other intruder.

“We had only lived in the house for less than a year. The previous owner had myriad tenants who rented rooms. There was a distinct possibility that one of these ex-tenants came back from a night of drinking or drugs and had mistaken our home for theirs.

“I could tell that the person on the stairs had stopped right at the top step or the one right below it. I turned on my light, got out of bed, and looked at the top of the stairs and no one was there.

Is this a real haunted house? Those who lived there in the early 1990s would say that it is. We have tried to conceal the actual location of this private home and ask those who recognize it not to bother its current residents. They have enough problems, if the house is still haunted.

[2016 update: The current residents say that they’re not troubled by any ghosts at the house. But, if a ghost did show up, they’d be fine with any benign spirit.]