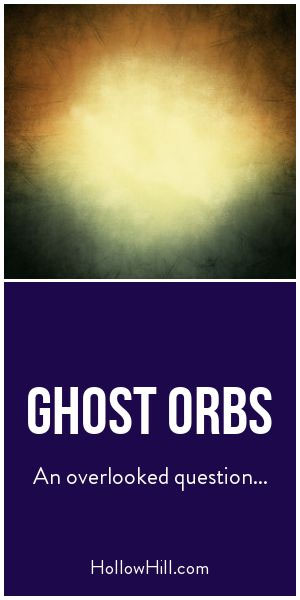 Ghost orbs are a controversial topic.

Some orbs can be explained as refracted light from moisture, reflective surfaces, insects, pollen or dust.

But – and this is important – false orbs aren’t the big problem I thought they were.

Now I’m embarrassed when I hear someone dismiss a credible orb as “it’s just dust.”

In other cases, you can see the insect or dot of pollen in the center. It’s more solid-looking. Enlarge your photo and take a close look, to be sure.

When it’s a bug, the reflection is usually white. Pollen usually shows up as a solid yellow dot in the center of the orb. It’s not see-through (translucent).

Always rule those things out.

What if you can’t debunk it?

Some of us believe that unexplained orbs –  described as photographic anomalies – indicate possible paranormal activity.

But some ghost researchers still insist that orbs aren’t evidence.

Critical skeptics fall back on the easy answer that every unexplained orb is just dust. Or insects. Or a reflection.

When I ask how much research they’ve done with their own cameras, trying to create fake orbs, they usually change the subject.

In the years since I wrote this, I’ve met just one researcher who thoroughly experimented with orb photos. He told me he could create convincing, orb-like images with extremely fine powder carefully blown from the surface of a credit card.

Perhaps he can. I’m still trying to replicate that, myself. So far, no luck.

But… Sure, Let’s Pretend It’s All Dust

In fact, it’s obvious when you think about it.

Why do we see so many more orbs in photos taken at haunted places?

Why are there dozens of orbs in photos taken at a haunted cemetery, and hardly any orbs at a field just down the street from that cemetery?

If they’re both equally dusty, shouldn’t we see an equal number of orbs in the photos?

Let’s backtrack for a moment.

Most ghost hunters point to physical evidence such as doors that slam without explanation.

Or, they’ll talk about lights, radios and televisions that turn on “by themselves.”

We’ve seen balls roll by themselves, pencils move across tables, and so on.

So, why is it so preposterous to think that a ghost might deliberately lift flecks of dust, to manifest as orbs in our photos?

Remember the movie, Ghost?  In one scene, Patrick Swayze – as a ghost – struggles to move physical objects.  Fortunately, another ghost shows him how it’s done.

But what about ghosts in cemeteries and other haunted locations?  Maybe no one has shown them how to move large and heavy objects.  Perhaps a particle of dust is all they can manage.

A ghost that gets our attention with a fleck of dust is no less real than a ghost that slaps someone, rolls a ball across the floor of a deserted hospital, or slams doors in an empty hall.

Those ghost hunters have viewed thousands – perhaps tens of thousands – of orb photos. They know what to look for:

If You Can’t Debunk It

The next question should be: Is the dust an anomaly?

If you’re seeing unexplained orbs in photos taken at one location, take photos at a nearby location with similar levels of dust,  pollen, and so on.  Equal orbs indicate natural causes.

However, if you see orbs in photos at a haunted cemetery but not in photos at the Little League field next door, the real issue isn’t whether it’s dust.

Instead, ask why the orbs only show up in the haunted cemetery.