Most “ghost orbs” appear in photographs or videos in haunted places. So few people see them floating in mid-air, some researcher speculate that they can only be seen by gifted, psychic people. 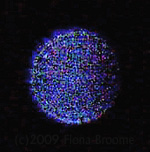 “Orbs” usually refer to the round, usually translucent, round or ball-shaped images that we sometimes see in photographs.

If you look at them closely, a few orbs seem to have faces in them.  Some orbs seem to be made up of tiny facets.  Most orbs appear as milky circles or spheres.

People often call them “ghost orbs,” since they seem to indicate paranormal energy.

However, many orbs in photos can be explained naturally. You can see the pollen in the middle, or the insect. The shape is usually irregular.

Don’t accept the easy dismissal of all orbs as dust, moisture, etc.  See the photos in my 2013 article, What Is “Paranormal”?, if you think moisture or reflections always produce orbs.

I recommend trying to create fake orbs with your camera, before deciding what’s real and what isn’t.  You may be surprised.

Orb sightings and the spirit world

Many people speculate about orb sightings. Some explanations include:

How to see orbs

The best way to see orbs is to take lots of photos in haunted locations, or places where people have seen (or photographed) orbs in the past.

Take dozens of photos, if you can.  Study them closely for orbs.  Adjust the contrast or lightness of the photo, so you don’t miss anything.

If you’re one of the fortunate few who see orbs floating in mid-air, here are tips to help you see more of them.

Orb sightings are a controversial topic in ghost hunting.  However, if you’re fascinated by ghost orbs or find comfort in them, every orb sighting can be very important.