Old Town Spring — just north of Houston, Texas — is haunted. Some claim that it’s the most haunted town in Texas. I’m not sure about that, but it’s definitely an eerie place after dark.

There are several locations that fascinate me, but one of the best is the old bank building.  It’s no longer a bank, but it’s part of the retail district in Old Town Spring.

The bank is easy to recognize: It’s the brick building with bullet holes, in the middle of the 100 block of Midway. It’s on the same side of the street — and just a few doors from — the haunted Wunsche Bros. Cafe and Saloon.

In the photo at the left, you can see one of the bullet holes in the bank’s brick exterior. The Spring State Bank  was the site of at least two robberies involving gunfire. One may have featured the famous team of Bonnie & Clyde.

DO THE BANK’S GHOSTS LINGER?

In January 2006, the bank building was empty once again. Shops move in, and soon move out.

I’m not sure anyone would say that the building’s ghosts are a problem or even real, but — with a violent history like this — it’d be odd if there wasn’t some haunted energy there. We keep revisiting this building because there’s something there, inside and outside the old bank.

Sure, there’s residual energy. After two gunfights, that’s normal for a town with the “wild west” history of Old Town Spring.

But, my “gut feeling” says there’s at least one figure walking around inside that building, after dark.  In most cases, when that feeling is worth mentioning, investigations prove me right.

During a November 2005 ghost investigation, I captured a couple of odd photos at the bank. In the images below, you can see a light or mist forming at the right side of the photo.

I’d have dismissed the picture at the right as an insect or hair in front of the lens, but the second photo — taken minutes later — makes it clear: This was an anomaly that formed while I was taking these pictures. 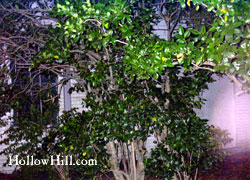 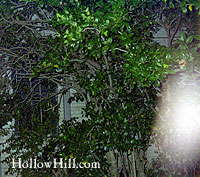 Those are intriguing photos… the kind of pictures that demand additional investigations. Sometimes, you can find explanations for these kinds of images. In this case, we couldn’t. It’s not hair, jewelry, breath, moisture, or dust.

I’m not sure these photos are ghostly, but they’re definitely odd.