Several people have commented on this ghost photo. It was taken at an old bank building in the middle of Old Town Spring, north of Houston, Texas.

The picture at the right has been modified only to enhance the contrast. I’ve added a circle to indicate where the face is. Other than that, this photo is exactly as it originally appeared.

That ghost would be full-size — about six feet tall, or a little shorter. That is, if you could see my reflection in the window — which you can’t — it would be about the same size as the ghost. (I look nothing like the ghostly figure.)

There are many interpretations of this ghost photo. Some people see a full figure within the circle. Others see a cowboy in chaps.

I’m the first to admit that this is one of those “either you see it, or you don’t” photos. It may be nothing more than a quirky reflection from the flash on the window. I’m fine with that.

On the other hand, when I see really weird images and anomalies, I pause and wonder if that old adage is true, and there are no coincidences.

The bank’s robberies took place in the 1930s, and the robbers may have included the infamous Bonnie and Clyde. 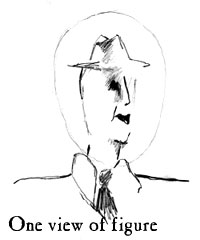 In addition, the town has ghosts dating back to its “wild west” days. So, any figure from those eras is likely.

We were outside, looking in, when I took a series of pictures.  I angled my camera to reduce glare from the flash, but — of course — a lot of people are going to say, “Of course that’s the reflection of her flash camera.)

I don’t have a lot invested in being right about what I see when I’m ghost hunting.  Confirmation is always nice, but it’s not required.  I know what I see.

Above (left) is my sketch of the figure in the window, as I see him.