Old Town Spring has earned a reputation as “the most haunted town in Texas.” Whether or not that is true, it has some very dramatic ghosts.

One of the most haunted buildings in Old Town Spring is in the old bank building in the middle of the 100 block of Midway. It’s just a few doors away from another famous haunted site, Wunsche Bros. Cafe and Saloon.

However, we have yet to capture anything dramatic in photos at Wunsche Bros. Cafe and Saloon. By contrast, the bank is profoundly haunted.

The little brick building — seen in the photo, above — has been the home to many shops since the 1930s when it was the Spring State Bank. In the 1930s, that bank was the site of at least two robberies involving gunfire.

One team of bank robbers may have been included the famous Bonnie and Clyde.  The evidence isn’t entirely convincing, but it seems pretty likely.

THE BANK IS GONE, BUT THE GHOSTS REMAIN

Today, the bank is a memory, as shops move into the building… and then move out. The reason that this prime real estate sits empty again (as we write this in January 2006) may simply be ghostly energy — also called residual energy — in the old metal vault that’s still part of the building.

Or, if our suspicions are right, at least one ghostly figure may be trapped inside this building, looking for the cash deposits that left when the bank did, over 50 years ago.

On the night of January 6th, 2006, we returned to Old Town Spring to investigate some of its many haunted sites. On this chilly Friday evening, our focus was on the old bank building at 115 Midway, in the middle of Old Town Spring’s popular shopping district.

AFTER DARK, THE MOOD CHANGES

The sidewalks roll up early in Old Town Spring. Restaurants such as Puffabelly’s and Wunsche Bros. Cafe and Saloon remain busy and boisterous, but the surrounding streets are dark and quiet… except for the old bank building. Something walks inside that building, and it’s not a night watchman.

Most of the windows of the old bank are covered with paper, and a sign indicates that the empty building is for rent. However, you can look into some of the windows. If you do, you may feel that–if you could peer into the darkness a little better–a figure or even a terrifying face might appear at any moment. It’s that kind of place. 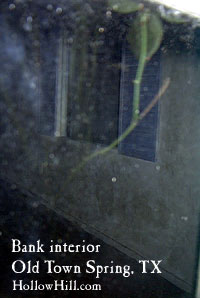 Most of my photos that night are a little odd.

The night was entirely still, and this building has been empty for months. The windows are all sealed tight, as are the doors. There was no reason for dust to be circulating, to cause multiple orbs. But, in many of the pictures, that’s what we see.

The photo at the right is the only reasonably “normal” picture of the evening. It was taken through the window next to the bank building. Those shutters are indoors. I’m not sure about the architectural plans, but that wall may have been an exterior wall, left “as is” when it was attached to neighboring shops.

Most of my other photos are filled with orbs of all sizes. Most also include glare from my flash, so I have to discount most of the orbs as lens flares.

However, one photo still makes us scratch our heads and wonder what it is.

IS THIS A GHOST?

Below, you can see two copies of one photo. First, you’ll see the photo exactly as I took it. (The original is far better.) Yes, the camera’s flash could account for everything in this photo… but I don’t think that it does. I have a dozen other pictures with the same reflected flash in them, and not one features anything this odd. 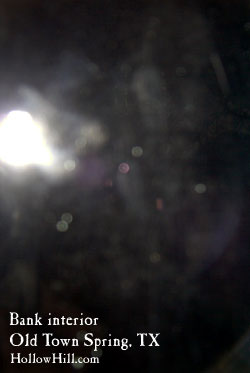 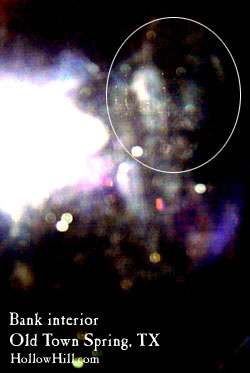 We’ve already had several other interpretations of the figure in the photo. Perhaps spirits manifest differently to different people, and use the available energy in the picture to “reach” them? (If you click on the second photo — the one with the circle on it — you can see a sketch of what we first saw when we looked at this picture, and additional details about the ghost: Old Town Spring – ghost photo detail.)

What’s especially intriguing is that everyone seems to be describing a similar figure… but he manifests in different ways to each person.

I’ve taken thousands of photos, and most of them aren’t worth comment. Now and then I see one that stands out because it’s different.  This is one of those photos.

There may be very logical explanations for it.  This may be just a play of the light, a quirky reflection, and my own imagination.  I’m willing to accept that.

However, I wanted to share it with you because–whatever else it is (or isn’t)–it’s an interesting photo.