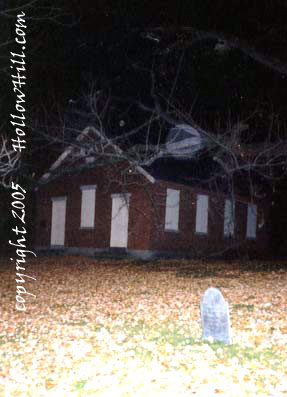 Fiona’s comments: After my camera refused to work on Halloween night at Blood Cemetery in Hollis, I visited Schoolhouse Cemetery in Nashua, NH, to prove to myself that there was nothing wrong with my camera or the film.

Schoolhouse Cemetery never felt very haunted. I’ve heard no local tales about it. Frankly, it’s on busy Daniel Webster highway, across the street from Bickford’s, with a large apartment complex in back of it.

Generally, I stay out of it to because I’m concerned about the living, not the dead who might be there. The cemetery has no light in it at all. The deeper you go into it, the creepier it gets. But I can’t say that it’s a really “haunted” feeling–just creepy.

On Halloween night, the highway was nearly deserted. I knew I could take photos at the entrance to the cemetery, without risking intrusion, flares, or reflections from apartment or shopping center lights. As you can see, it was very dark that night.

The orb surprised me when I picked up my prints. When I show my “ghost photos” and negatives, this is the one that impresses most professional photographers.

At right is the second photo I’d taken. (It’s my habit to take two photos in a row, as quickly as possible, without moving or even breathing between the pictures.)

As usual, these two photos were taken within seconds of each other from the same location.

The schoolhouse is boarded up. There are many headstones in the cemetery, but only one shows in the photo.