The following photos are from several years’ tests, trying to create convincing, fake, ghost photos.  As you can see, it’s not as easy as I thought… or as simple as skeptical critics claim.

Spider webs with moisture in them

Some people might confuse the lines for ectoplasm, but most won’t. 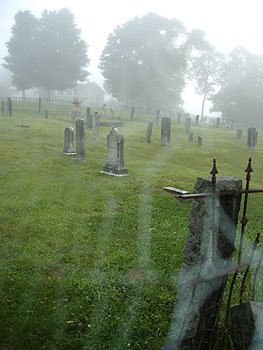 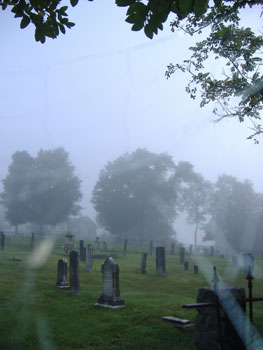 Damp, foggy morning, using the flash in all photos

As you can see, there were no orbs, even in thick fog.  The third photo (lower left) has something odd in it, but it’s not an orb, as I’d been expecting from so much dampness. 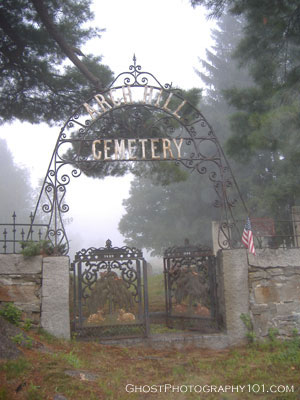 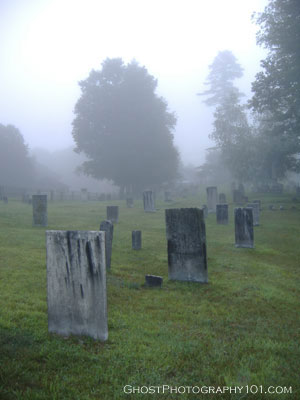 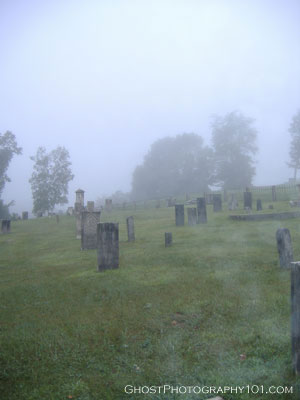 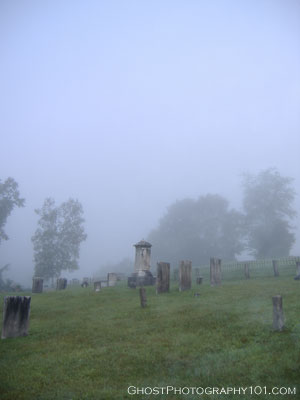 In some cases, hair could be confused with light streaks or vortex images.  The color of the hair is the clue. (My hair is auburn.)

However, notice the last of these four photos, at the lower right.  It looks like it has large, overlapping orbs. That’s also a photo of hair; when the light catches it in a certain way, it appears as a series of large, faint orbs. 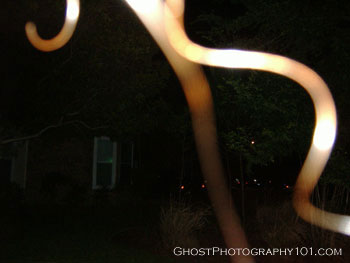 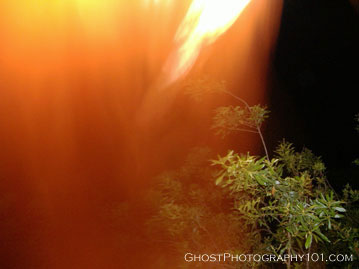 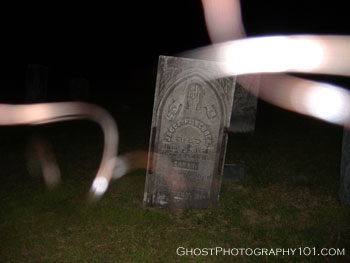 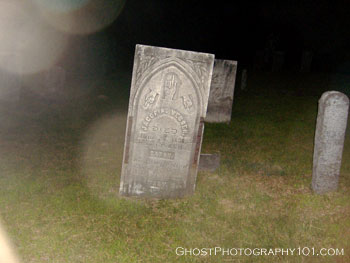 Frankly, the smoke photos showed almost nothing.  The only way we could get smoke to show up in pictures, consistently, was to use actual stick incense.  The results open some interesting questions.  And, yes, some of these could be mistaken for anomalies.  That of course raises the question: If someone nearby were using incense, wouldn’t a photographer notice the fragrance? 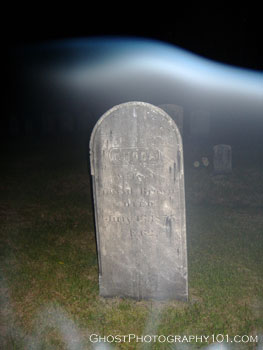 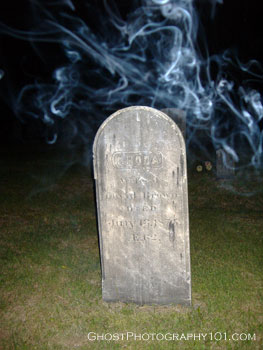 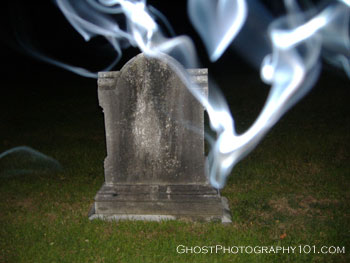 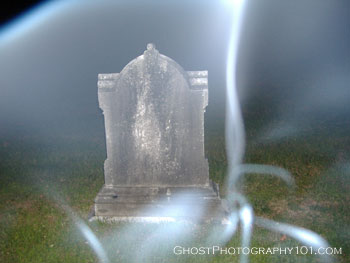 Pollen was very difficult to capture in photos.  Even shaking ragweed directly over the camera lens, the pollen rarely showed up at all.  (See the third photo, in the lower left, where I was shaking the ragweed in front of the lens.) The final photo in this series shows what it looks like to crush the ragweed with your hand, and then sprinkle the pollen in front of the camera lens.  These extremes suggest that pollen is rarely a problem for an experienced ghost photographer.

However, in the few photos where it did show up, it could look similar to orbs with “faces” in them.

Unless you’re standing directly underneath a tree that’s sprinkling pollen, or it’s a very bad night for hay fever, I don’t think pollen is a major concern.  Among the few photos that showed pollen orbs, even fewer were orbs that we’d confuse with actual anomalies.

Is it possible to confuse pollen for an anomalous ghost orb?  Yes.  Is it likely?  No. 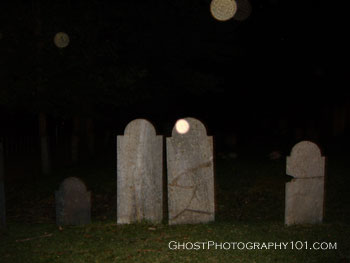 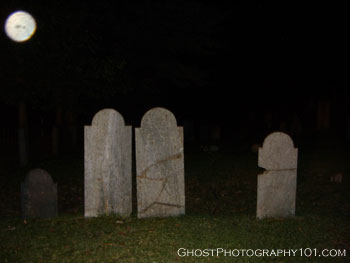 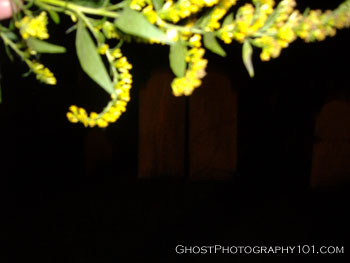 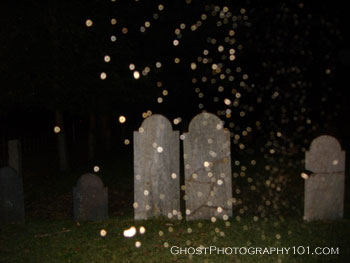 Dust particles — from household dust and dust (or dirt) kicked up while walking — were equally difficult to confuse with anomalous orbs.

In the first photo (immediately below this text), that’s a Swiffer duster, caked with dust, that my husband was shaking in front of the lens.  Nothing showed up, except the actual duster.

In the next two photos, you can see orbs and other shapes created by reflected dust.  They’re more likely to be confused with ghost orbs, but I think I took 50 photos to get these results.

The final photo in the dust & dirt series shows what very dry, fine dirt looks like, sprinkled in front of the lens.  This is the same powdery, dusty dirt that could be kicked up by people walking or a car driving past you during an investigation.  It looked almost identical to pollen, but a finer texture.

Keep in mind, all of these particles were sprinkled within three inches of the camera lens.  Few produced images large enough to look like ghost orbs, and other characteristics  — such as a solid, dark dot in the middle, or an irregular, notched circumference — usually don’t match anomalous orbs.  However, a  few dust orbs did look like anomalous “ghost orbs.”  (Some researchers might argue that those few were actual ghost orbs.  After all, most of these photos were taken in haunted cemeteries.) 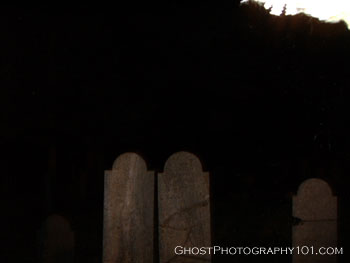 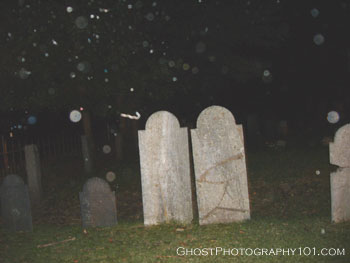 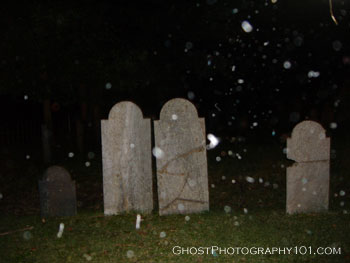 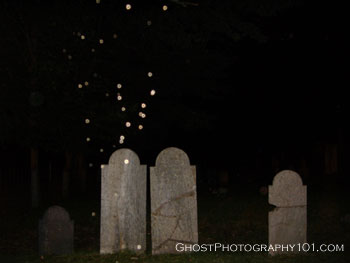 Rain produced such obviously fake results, I don’t think rain is an issue for professional or experienced investigators.  First of all, you’re likely to feel the rain even if you don’t see it right away.  Then, some of the drops reflect such as solid reflection, I doubt that you’d confuse a photo of rain with an actual, anomalous orb. 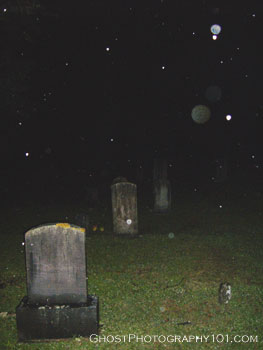 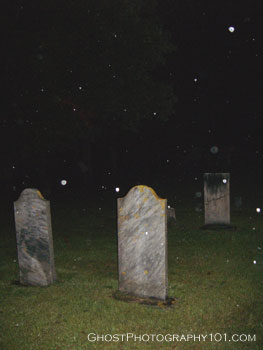 In my opinion, the number one issue for ghost photographers is breath.  Though these photos were all taken on a winter night, I was able to achieve similar results on a warm summer night when the dew point was high.  These are a few of many photos that show strange forms and mists, the result of exhaling sharply at the exact moment I took each photo.  So, these are extremes.

The third photo (lower left) intrigues me the most.  It’s a fairly benign-looking misty shape.  It could be confused with an actual, ghostly anomaly. 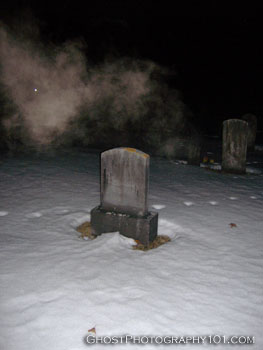 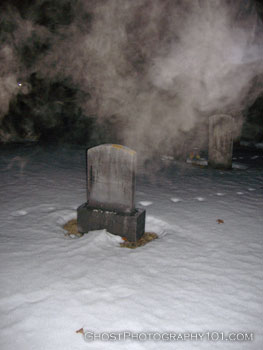 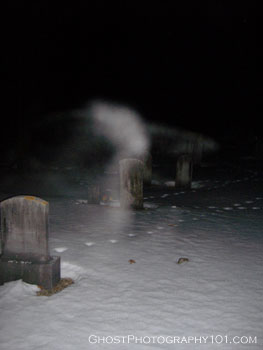 Before I completed the first edition of Ghost Photography 101, I showed these photos to someone else who’s been studying ghost photos for years.  He insisted that some of the photos did represent ghosts (particularly pictures like the third in the breath series.)

I could see his point, but in my research, if something could be explained by something normal, I have to discount that as a non-anomalous photo.  I’d rather err on the side of caution.

On the other hand, I think we need to explore another possibility:  If we give the spirits something to work with — like breath or incense — should we look to see what the spirits do with it?  After all, that’s not too different than using white noise to give the ghosts sounds to work with, to form EVP.  And, it’s also similar to using a device like a Frank’s Box, ghost box or “shack hack” to give entities sounds and words to use.

I’ll expand on this in the second edition of Ghost Photography 101.