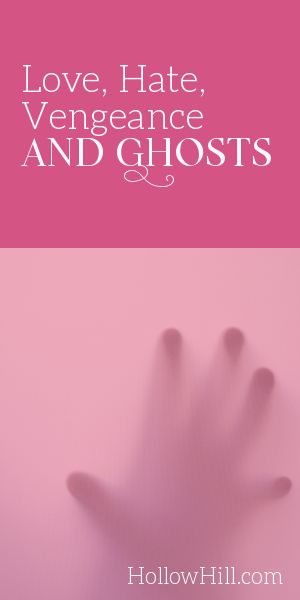 Love and ghosts… do they go together? Maybe, but not as I’d expected.

Of course, paranormal romances are popular. Usually, the hero (the love interest) is a ghost, trapped here or with unfinished business.

A (living) woman falls in love with him, and – after overcoming many obstacles – there’s a “happily ever after” at the conclusion.

That’s not what I’ve encountered at haunted sites.

Oh, there’s the occasional handsome, male ghost. He’s not looking for romance. Not in this plane of existence, anyway.

But… are any ghosts here, looking for love, or seeking a “lost” lover from their past?

Perhaps. I’m not sure.

Female ghosts seem to have the most romantic connections… but rarely in a happy way.

Many female ghosts were driven to their deaths, or even murdered. Most cases involved a man.

The most iconic might be the Japanese ghost of Oiwa-San. After her husband poisoned her and married a rich merchant’s daughter, Oiwa got her revenge in a particularly ugly way. The new wife died, and – in some versions of the story – the husband did not fare well, either.

But, though Oiwa-san died in 1636, her ghost lingers, and – even today – she may curse people. The evidence is unsettling. (Research it at your own risk. I’ve included links at the foot of this article.)

In England, a young girl in a white dress haunts Hiorne Tower, at Arundel Castle. She threw herself off a tower, and – apparently – continues to do so, many nights, especially around the new moon. Hers was a case of unrequited love.

Note: I’ve heard very few stories of haunted “lovers’ leaps.” If love was such a powerful element in hauntings, shouldn’t there be more, similar tales?

At Edith Wharton’s home, The Mount, Ms. Wharton mutters in her library. It’s practically a stage whisper. (I’ve heard it.) In French, she’s complaining about her husband.

The following is a video of Jeff Belanger discussing the hauntings at The Mount, and part of it is filmed in the library. (Ms. Cox says that no one hears voices there. I heartily disagree.)

Pulitzer Prize-winning author Edith Wharton’s home, the Mount, in Lenox, Massachusetts is renowned for its beauty and majesty – but there’s also a sinister s…

Something curious in that interview: Ms. Cox describes Henry James sitting in that library, as well. Two generations of my family had a close, often daily connection with Henry James and his family. I’m wondering if that connection is one reason I heard a voice in that room.

In Louisiana, a ghost called Chloe appears, usually outside the Myrtles Plantation’s main house. There’s no truth to the story of her poisoning the two children. But, she’s such a solid apparition, people have photographed her in full daylight. Perhaps she’s angry at being accused of (and remembered for) something vicious, when she was entirely innocent.

California’s Hotel del Coronado is where you’ll find Mrs. Morgan’s famous ghost. Is she looking for her husband? He was a conman and ruthless gambler. After seven years of marriage, Kate Morgan checked into the hotel alone as “Lottie A. Bernard.” Then, she bought a gun. Four days later, they found her shot through the head, on a path to the beach. The verdict was suicide. Later investigations suggest the bullet didn’t match the gun found in her hand.

This one-minute video is a little theatrical, but it shows the hotel room and the beach that Kate Morgan haunts.

This five-minute video is more authentic, and tells more of the story. You’ll also learn about an even more haunted room at that hotel. (The beginning of this video has a deliberate jitter. The rest of the video is fine.)

The Haunting at Hotel del Coronado

Chicago’s “Resurrection Mary” is a classic tale. Other communities have similar stories. Are any of them real, or is this just a fictional ghost story?

In the Chicago version – easily one of the most popular – Mary died in a car accident after fighting with her boyfriend. Is she trying to get back to the dance hall where they fought, or fleeing from him?

Here’s a Travel Channel clip about Resurrection Mary, including a theory about her grave. (Their version of Mary’s death is one of several. She may have been walking, or in a car at the time of the accident.)

The famous Resurrection Mary, known to be roaming the grounds of Resurrection Cemetery and Archer Avenue in Justice Illinois.

This list could go on & on. It nearly always involves a romance gone wrong, and a premature death.

If you study ghosts who protect homes and families, nearly all of them are women.

Banshees are female. They protect their families, and – as a group – they also protect the community. Before a major tragedy occurs in Ireland, people report the wail of the banshee (bean sidhe).

Green Ladies are, of course, female. They protect the homes they lived in. Usually, those homes are in Scotland, but Ocean-Born Mary is an American “green lady.”

Not all protective female ghosts wear green. Some wear white, and one of the most famous is the Brown Lady of Raynham Hall. So far, whether the photo is credible depends on when you research those who’ve tried to debunk it, and whom you believe.

Every one of these spirits seems to care deeply for her home or family, or both. So, I consider them ghosts who remain for love.

For example, there’s the “Grey Lady” of Hitchin Priory in Hertfordshire, England. She wears a long grey dress but no coat or wrap to stay warm, even on the coldest nights. The big question is: Why does she haunt the former home of monks? Was romance part of the story?

Then there’s the nun telling her beads (saying the rosary) around the Borley Rectory site. One popular story is that she was from a nearby nunnery and planned to run away with a monk from Borley Rectory.

Someone caught them. He was hanged, and they bricked her up alive… but where? Is she still looking for her lover?

This seven-minute video was filmed by the BBC at Borley in 1975. Peter Underwood – one of the 20th century’s most important paranormal researchers – explains the ghost stories.

A groundbreaking BBC documentary made in 1975. This first clip features Borley Rectory and Church, reputedly England’s most haunted place. You see an intervi…

Even before the 1937 Cary Grant film, Topper, people have believed in happy, ghostly couples.

From my experience, they exist. Almost every city seems to have at least one story of a ghost couple – or sometimes an entire, ghostly crowd – at a hotel, cafe, or club. I’ve witnessed several of them.

The Stanley Hotel, in Estes Park, Colorado (USA) – which inspired Stephen King’s book, The Shining – is haunted by Freelan Stanley, the founder of the hotel. He and his wife appear in the lobby and the billiard room, and the ghost of Flora (Stanley’s wife) plays the piano in the ballroom.

At New Orleans’ Hotel Monteleone, I’ve heard ghosts having a boisterous party in a reception room on the ground floor. They’re talking, dancing to ghostly music, and clinking glasses in the wee hours of the morning. If you approach the room, the noise decreases and the room is empty.

I’m not sure love and ghosts go together. Add some hate and vengeance for a more credible connection.

But, when you’re looking for ghosts with dark romantic histories, women seem to dominate the scene.

If you know great stories of lovelorn ghosts – especially featuring men – I hope you’ll leave a comment. At the moment, this article seems tilted far to the female side, and I’d like a little balance. Surely there are a few male ghosts who linger in our world, recalling past loves?