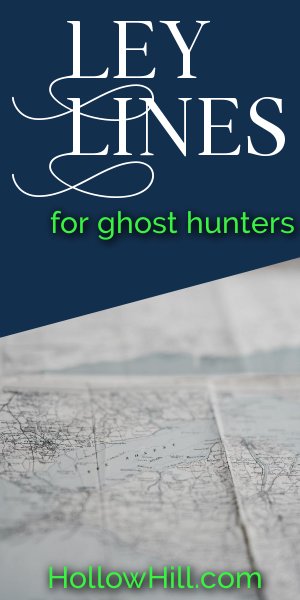 You can find haunted places with ley lines. I’ve been using ley lines for many years.

My way of using them is, umm, a little different. (It’s okay to call this pseudoscience, if you like. I won’t be offended; I know this works.)

For me, it’s a way to located overlooked (and under-reported) paranormal sites… with about 80% accuracy.

It’s a little difficult to explain what I do. That’s why I’m working on a second edition of my related book.

How I Use Ley Lines to Find Paranormal Sites

This is a ridiculously brief summary, but it may be enough to help you test-drive ley lines in your area.

First, I research all the weird things that happen in or near a known haunted (or creepy) location.

I keep researching, as long as I keep finding things that make me pause and mutter, “Wow, that’s bizarre.”

It could be a ghost story, a Bigfoot sighting, or a UFO report. It might be a Guinness Book event, or a crime that’s truly out-of-place for that locale.

Sometimes, my research covers hundreds of miles. And, I put a dot on the map for each and every story or event that I find.

And then I take out a ruler, and see which dots align.

Connecting the Dots… sort of

Though I call it “connecting the dots,” there’s more to it. I’m also looking for repeating patterns – dates, times of day, names, or whatever is most quirky about whatever-it-is.

History and geography are big components, but so is intuition.

The latter is the most difficult to explain in text… here or in a book.

Talking about this to audiences hasn’t been much easier. But, when I show one of my maps, it can make more sense.

The fact is: some of my maps are so accurate, I’ve been able to predict – within feet – where people will report something ghostly. And, I can do that even if I’ve never visited the site.

My History with Ley Lines

Since the 1990s, I’ve used ley lines to improve my ghost hunting results, and when I’ve scouted locations for TV shows.

My research is unique.

Back around 1997, when I first noticed connections between some haunted sites, I contacted ley line researchers like Paul Devereux.

Each said no one else had considered using ley lines for ghost hunting.

After exchanging a few letters with Mr. Devereux – the leading expert at the time – I could tell he was somewhat skeptical.

Since then, this has been an extraordinary adventure.

My ley lines have been reliable, from paranormal reports in the White Mountains of NH to haunted sites in Salem, Massachusetts, and from ghosts of New Orleans’ French Quarter to UFOs in Quebec, Canada.

I still use ley lines in my research, and it’s still working for me.

Even before I could get the facts into people’s hands, word spread about my research.

Oops.  That wasn’t one of my better ideas. In my haste, I left too many questions unanswered.

When I took a fresh look at my book, I knew they were right.

I quickly withdrew it from publication.

For the past several years, I’ve been working on a complete overhaul of that text, with lots of additional maps to show how this works.

As of late 2020: Though other projects keep getting in the way, I really do plan to release my ley lines book in the near future.

With a list of local haunts, a map, and a ruler, you can determine the best locations for paranormal research… even haunted places no one talks about.

In this book, I’ll show you how to find ley lines (sometimes called “energy lines”) that seem to connect paranormal, sacred, and unusual sites.

Book ETA: 2021 (Really. I mean it, this time. I’d previously aimed for 2020, but we all know how that year went. Getting out and about, to gather data and confirm locations…? Nearly impossible. Fingers crossed, 2021 will be better.)