Houston’s West Oaks Mall has a classic ghost. He’s an apparition, and he appears very briefly during early morning hours. (He may appear at other times, but ghost hunters have seen him around dawn.)

Phantom appears near the third pole but before the fourth, counting from Westheimer.The ghost appears on the north side of Richmond Avenue, about a block from the intersection of Westheimer and Richmond. [ Google Map ] The phantom appears between Green Crest Drive and Westheimer, on the West Oaks side of the street. He’s about 20 feet away from where people turn off Richmond to enter the West Oaks Mall parking lot.

In the photo above, he’d be near the red arrow, and the maroon car would partially block your view of him.

The figure is an apparition, but doesn’t seem to be a full body. His head isn’t very clear — no one has seen it yet, so he may be headless — and he’s usually invisible from the knees down. Everything else… well, he could almost be confused with an early morning pedestrian.

That’s where this becomes difficult. Until late in 2006, the West Oaks Mall sign was lighted at night. So, if you were watching the ghost from near Westheimer, you could easily tell that he’s an apparition, not a real person; the lighted sign could be seen through the apparition. Also, he fades gradually. It’s difficult to see that in the darkness.

At that hour, there are many people walking along Richmond — including at least one man who wears light-colored shorts — and there are three popular bus stops on that section of Richmond.  Don’t confuse the living with the apparition; it’s easy to do so.

Be especially careful about the brief flash of headlights from cars exiting the apartment complex across the street. Their momentary flash can look like a glowing apparition, especially along the grassy area.

When and where to look for him

We’ve studied this phantom for several months. He generally appears at about 6:15 a.m. and he’s visible for about five seconds at a time. Most mornings, he seems to appear once or twice — usually within five minutes — but we’ve never seen him more than three times per day. We see him most often on Tuesday mornings and Saturdays.

We haven’t seen him after the sun is visible in the sky; that was about 7:15 a.m. during late December. In fact, we rarely see him after 6:45 a.m. We’ve never seen him on a Friday.

I’ve observed him myself from my car at Westheimer, but unless you’re waiting at the traffic light, there is no convenient place to watch from the road. There are three parking lots at the intersection of Westheimer and Richmond, and each of them can be adequate for viewing.

What to look for

The “West Oaks Walker” is a blurry figure. He’s wearing very light (perhaps white) breeches and a very dark top or jacket. He could be a Spanish soldier.

He’s walking but — as if moonwalking — he doesn’t cover very much distance. Because his lower legs and feet aren’t usually visible, we can’t tell if the apparition is walking on the ground. Generally, people believe that he’s walking about a foot above the ground.

The figure fades in quickly and fades away gradually. He doesn’t “blink” in and out of our world. He rarely looks entirely solid. (The exception was 13 Sep 2007. See our Sightings list, below.) The figure glows slightly.

Orb photography is unreliable due to lights at the mall, a security guard touring in a vehicle, and commuter cars with headlights. Likewise, underground pipes and power lines make EMF readings and dowsing unproductive. So, we have no hard evidence of this haunting. 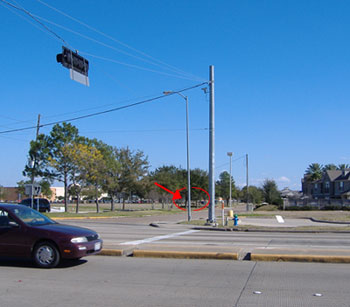 [Photo taken from Westheimer, in the U-Haul parking lot]
Phantom is seen in the area indicated by the oval.
He may be walking on the sidewalk or on the grassy area behind it.

Until I spotted the phantom and told others about it, I’d never heard anything about a ghost around the West Oaks Mall. From his breeches and very dark top or jacket, I’d guess that he’s a Spanish soldier.

August 2007 update: The West Oaks Walker appeared at 6:23 a.m. on Tuesday morning, 21 August. It was a clear but humid morning. He appeared about 20 feet closer to Westheimer than usual. He was visible for nearly 30 seconds before vanishing.

12 Sep (Wednesday) – 7:02 a.m. – Figure appeared for less than a second near the third wooden pole from the corner of Westheimer, on the mall side of Richmond.

13 Sep (Thurs) – 6:21 a.m. – Multiple figures appeared simultaneously and over a period of more than ten minutes. One notable figure was clearly visible in white breeches and a dark (navy?) frock coat with a standing collar. Heavy braid on the collar was highlighted by the early morning light. He had very dark, curly hair that extended almost to his shoulders. He wore no hat, and looked directly at us. Then, he faded away.

We’ve looked for any history relevant to that day in Houston history.

So far, the closest that we can find is Mexico’s Independence Day (Diez y Seis de Septiembre) — also celebrated in parts of Texas — on September 16th.

There’s also a September 13th event (in 1764) when Gov. Martos suspended Capt. Rafael Martínez Pacheco, who refused to be arrested and escaped with at least one other soldier, near Beaumont. Charges against Martinez were later cleared.

On September 13, 1766, the alferez José Antonio de la Garza Falcón and his soldiers began a mission to support Diego Ortiz Parrilla, searching for English settlers on or near Padre Island.

Could they have searched as far as Houston? After six days of heavy rain, was the site of today’s George Bush Park a waterway? The soldiers’ search was not successful, and this is our strongest connection between September 13th and the Spanish-looking apparition.If anyone can suggest other historical connections to this haunting — which seemed to peak on September 13th — let us know.

21 Sep (Thurs) – 6:25 a.m. – [NOT A GHOST] Before dawn, someone in white trousers and a dark-ish shirt or jacket was walking around the area where we most often see the West Oaks Walker. This was a real person, not a ghost. Either the person was walking a dog or trying to fool us into reporting a fake apparition. (Yes, people do that.) What we realized from this is that the ghostly figures glow slightly. The real person didn’t.

4 Oct (Thurs) – 7:00 a.m. – Figure very close to the third utility pole. The white trousers were very visible but the rest of the figure was less clear. We thought it was another prankster until the entire figure faded about ten seconds later.

Have you seen him? Leave a comment! Please include the date, weather conditions, and what you saw. Thanks!