A romantic couple haunted the Katy Depot area on the evening of January 2nd, 2006.

I don’t often talk about my psychic perceptions, but this imagery was one of those “clear as day” visual images. Others who’ve visited the depot and stumbled onto this website have been amazed that I sensed the couple, as well.

The impression was so vivid, I could sense the couple  as soon as I got out of my car. He’s a man in a brown suit with lapels trimmed in braid. She’s taller than him, especially with the tall, perky hat that she wears. And, she holds his arm as they stroll around the depot.

I’ve sensed this couple before, but — until that particular night — their images weren’t so clear in my mind… or in photos.

I like to think that they’re remembering a time when they took a romantic journey by train, perhaps to some still-wild part of the Southwest, or a second honeymoon in Kansas City or Chicago, during a more genteel era.

Did this couple show up as twin orbs in my photos around the depot? Maybe. It’s a fun thought. Here’s one of several photos of the twin orbs, taken over the rail car by the Katy depot: 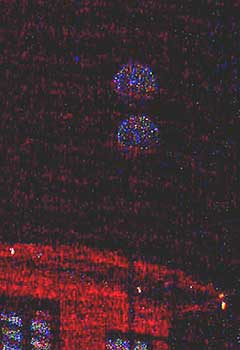 Of course, I’d suspect that something was reflecting dual orbs, or perhaps a lens flare. When I see orbs in a straight line, I almost always think, “Lens flare.” However, at the depot building at least 20 feet away, my photos included the same twin orbs. Here’s another photo of them: (These photos are grainy because — too late — I discovered that I was taking the pictures at a film speed of 100.)