In June 2005, we began investigating the “old town” area of Katy, Texas. We began with no reports of ghosts in Old Town Katy, but a gut feeling that it might produce some good orbs.

(Frankly, a lot of my work involves predicting & investigating haunted sites before any other website does. And, as of mid-2005, no other ghost website — and no ghost-related TV show — had reported anything about the ghosts of Old Town Katy.)

So, I was ready to see if my “gut feeling” and my prediction methods (including ley lines) were correct.

I began by looking for clues in Katy’s history.

Katy was originally called Cane Island and is about 25 miles west of downtown Houston. It was the hunting ground of the Karankawa Indians through the 1820s.

Unfortunately, a lot of the town’s early efforts were swept clean by the Galveston Flood of 1900.  (Many people don’t realize how far inland that water spread.)

Most of the early settlers in Katy were farmers. By the early 20th century Katy was best known for its annual rice crop.

In 1934, the discovery well of the Katy gas field was drilled. That led to new business opportunities in Katy and vicinity.

Today, Katy’s population is about 12,000 and growing with upscale developments opening steadily, especially in the Cinco Ranch area.

However, the historic side of Katy is the focus of our early ghost investigations.

All but two of the original Katy homes were lost in the 1900 hurricane that caused the Galveston Flood. We started our research at the oldest buildings with the most interesting history.

Our first stop was the old train depot (5710 Highway Boulevard, near East Avenue and 1st Street). This wonderful old building is being restored by the Katy Historical Society. Only a few of our depot photos show orbs, but those that do are notable. 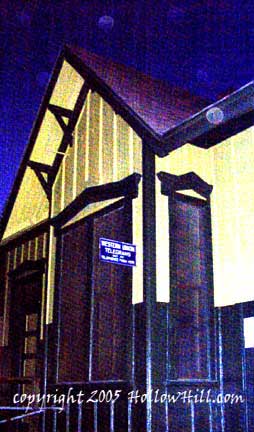 Here’s a close-up of one of the orbs:

I’m not going to claim that one orb means anything.  It’s pretty, and it’s odd that there’s just one orb at a site that feels so connected to its history. However, that’s not nearly enough to say that a site is haunted.

Despite that, the site is convenient, not far from I-10.  Also, it’s a quiet area, and a comfortable spot for ghost hunting.  So, we’ll continue to explore it.