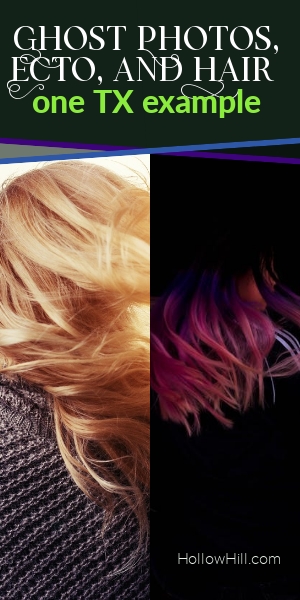 Old Greenhouse Road, on the outskirts of Houston (Texas), has numerous ghost stories.  Most of them repeat tropes I’ve heard before in multiple locations.

Are they urban legends? I’m not sure.

My husband and I parked our car just off the road, near the “haunted” bridge, to take photos.

Though the road is the site for the ghost stories, I felt drawn to the little path through the shrubs, just past where we parked our car.

That’s where I took several photos.

Those who know me in real life know that I’m very skeptical of anomalous photos. As often as I can, I return to the location – in daylight and at night – to see if I can debunk whatever’s in the picture.

Initially, I couldn’t debunk this photo. Not at Old Greenhouse Road, anyway. We visited several times and none of the pictures looked like the one on the lower right, taken in 2005.

Those two photos were taken within seconds of each other using a film camera without a flash.

It was dusk and the sun was directly behind us, highlighting the dirt path. About 50 feet ahead of us, the trees and shrubs were very dark.

Something there… it seemed very eerie. I hoped my photos would show something unusual. (In other words, I wasn’t 100% unbiased.)

Initially, I thought this might be an “ecto” (ectoplasm) photo.

At the time, that was intriguing. I rarely see convincing ectoplasm in photos. In fact, it’s usually smoke or someone’s breath.

Later experiments revealed the most likely cause of the red-orange line across the photo.

It was probably a strand of my own hair. (It’s auburn.)

Generally, I wear a scarf or otherwise pin my hair back, so it won’t get in front of the camera lens.

In this case, I’d forgotten.

Though the following pictures aren’t exact matches, I think you’ll see why I’m at least 99% sure the “ecto” at the Houston site is my hair.

Here’s one photo of my hair in front of the camera lens, highlighted by the flash. 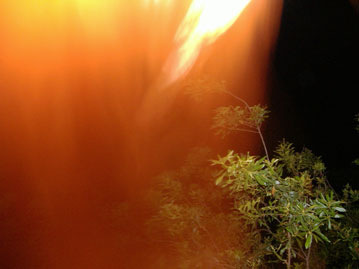 And here are a few hairs, held in front of the camera. Once again, the flash highlighted them.

Since those experiments, I’ve been very careful to keep my hair pulled back – preferably under a kerchief or scarf – when I’m taking photos at haunted sites.

Meanwhile, I can’t dismiss every story at Old Greenhouse Road in Houston. Frankly, it’s a difficult location to research. Speeding cars and sharp twists in the road increase the danger of investigating in low-light conditions. I won’t put myself – or my team – at risk, especially at a site that seems to match the “urban legend” profile.

But, for those who’d hoped my photo proved something ghostly at Old Greenhouse Road, I apologize. My initial assessment was wrong, and – even if it’s not a flash photo – hair can explain translucent streaks, when the color matches the haircolor of the photographer.

That doesn’t debunk the streak in the Gilson Road photo. I have never found an adequate explanation for that.

There are several differences. One of the main ones: I was the photographer. My hair was not purple. And, the texture in the original photo is significantly different. (Plus that, the purple streak photo was at Gilson Road Cemetery. We couldn’t debunk the majority of our photos taken at that very haunted site.)