Beeler Family Cemetery in Houston is an odd little cemetery. It’s about two blocks from busy Eldridge Parkway. (The Parkway has its own rumors of ghosts, and an unusual number of auto accidents involving drivers who’ve ‘lost control’ of their cars.)

Beeler Cemetery is small, contains about half a dozen grave markers, and it’s in one of Houston’s ‘pocket parks’ amid upscale corporate offices.

In May 2006, we joined the Texas Paranormal group for an investigation of this cemetery. Because the cemetery is surrounded by immaculately groomed lawns and sterile corporate buildings, we weren’t expecting much. 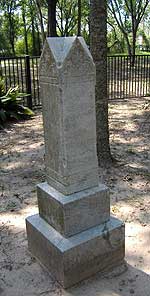 Even in the daytime, there is a strong presence around the tallest monuments.  (One of the most active is shown, above.)

At night, some of our photos showed moderate orbs around them. Amanda Beeler’s grave seems to be the most active.

The photo at right is one of several with bright orbs.

Some of the most haunted graves are located outside cemetery walls.

Especially at church cemeteries, graves outside the walls usually belong to suicide victims, murderers and people considered ‘too sinful’ to be buried among regular church members.

When graves are outside a family cemetery, that’s an even more harsh condemnation.

We weren’t surprised when our photos showed vivid orbs in back of Beeler Family Cemetery.

Notes from the Other Side

When I tried to do a reading on Amanda Beeler to see why her grave is most active, the woman who responded was named ‘Olive’, not Amanda. I’m not sure if it’s the same woman — perhaps a nickname — or a different person.

Olive had given birth to a daughter, but trusted the wrong man. That trust led to something disastrous, possibly her death. She’s not trapped here, but she returns because she’d like someone to acknowledge the subterfuge of the man she’d trusted.

(I’m not sure who he is. There’s not enough information to work with, yet.)

I did a second reading to learn about a man who haunts the land in back of Beeler Family Cemetery. He’d accomplished all that he was supposed to during his lifetime. Oddly, he trusted the same man as Olive had. His ghost lingers because he’s either protecting Olive (and perhaps others), or wants to help expose the man who’d betrayed both of them.

This cemetery — and its hauntings — are active and part of an ongoing story that hasn’t concluded yet.

These aren’t unhappy spirits who are trapped here, but they’d like their history to be accurately reported. So, they are likely to respond to perceptive visitors and ghost hunters. 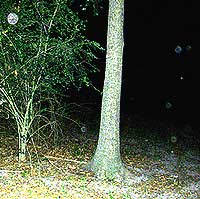 Although this is an upscale area in the daytime, it’s quite deserted at night. Also, the cemetery is partially hidden from the street. It’s especially important not to ghost hunt alone in settings like this where you may have a false sense of security.

There are many street lights around Enclave Parkway, where this cemetery is. Be sure to watch for them when taking photos, as they can be a source of false orbs.

The sandy soil at this cemetery can also produce false orbs if the dust is raised as you walk, or by the wind. It’s vital to take two photos in sequence, as close together as possible, to rule out natural explanations for orbs and other anomalies.

To visit the cemetery after visiting Bear Creek Park, take Eldridge Parkway south from Patterson Road. After passing I-10 and Memorial Drive, look for Enclave Parkway on the left. (There is a traffic light with a protected left turn.)

If you’re arriving from I-10, take the Eldridge exit and turn south. After the traffic light at Memorial Drive, watch for Enclave Pkwy on the left.

Shortly after turning onto Enclave Pkwy, look for the Pocket Park sign on your right. Turn right immediately after it; it will look like a driveway, and there is room for a few cars in the small parking area. The cemetery is surrounded by a black metal fence in a wooded area.

If you drive past Cabot Oil & Gas Corporation on the right, you’ve gone too far.

If you approach from Briar Forest, take Enclave Parkway almost to where it intersects Eldridge. Look for Cabot Oil & Gas on your left. Turn left at the driveway immediately after Cabot’s sign. [Google Maps]