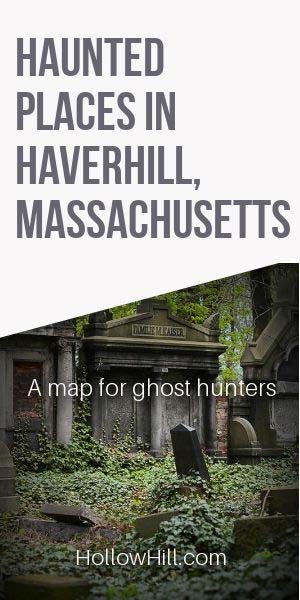 In fact, it may be one of New England’s most overlooked – and reliable – haunted communities.

That makes it a great location for ghost hunting.  But, many of the best locations are off-limits at night, or require a fee to explore.

Don’t let that deter you. Haverhill’s ghosts can be worth the extra effort.

In 2017, I was interviewed for an article: Haunted in Haverhill, by Alison Colby-Campbell. The article was in the October 2017 issue of Haverhill Life.

Here are my research notes from that interview.

In the second triangle, the solid lines connect the same initial points to St. James’ Cemetery instead of Hilldale.

Anything within the two, overlapping triangles might be worth extra research. Those areas have a greater likelihood of ghosts.

The problem was: when I was working with that map, it just didn’t feel right.

That’s difficult to articulate. At this point, it’s simplest to say that some of my ley lines work is intuitive.

Further, if I keep working on the troublesome map that “guesswork” almost always rings true.

That was the case with the Haverhill map.

Other Eerie Places Confirmed My Results

On a whim, I took a fresh look at the map. I studied everything in the area, and thought about weird news reports and nearby paranormal sites.

That’s when I remember the Westford Knight. (That site is in Westford, MA. I’m not sure it’s still worth visiting, but – many years ago, when I first saw it – it definitely looked like a primitive, medieval knight’s burial.)

When I connected the dots between the Westford Knight site, Northpoint Bible College, and Buttonwoods, it went through Walnut Cemetery and over the Isles of Shoals.

That line made more sense to me. It hit more major weird/paranormal sites.

If I were scouting haunted locations for a TV series (something I’ve done in the past), I’d focus on that line. I’d follow it exactly, and ask questions at any shops, restaurants, or other public sites along the way.

Frankly, that line is so strong, I’d stake my reputation on it leading through some other very weird (and probably haunted) locations.

It’s just a matter of looking, and asking questions of enough people. That takes persistence, patience, and a little audacity at times. But, it’s usually worthwhile, if you’re looking for unreported haunted places. You might find some so dark and weird, people avoid talking about them.

So, yes, if you’re a ghost hunter, Haverhill can be a goldmine of investigation sites, with very vivid ghosts.

The Haverhill Life article isn’t online now, but you can contact their office or ask at the Haverhill public library.