As I’m writing this on the fourth of July, it wouldn’t be a historic holiday without a ghost story or two.

And, since the 4th of July is so closely associated with Philadelphia (PA) – where the Declaration of Independence was signed – here’s a YouTube video about Philadelphia’s haunts.

The first half of the following video highlights haunted places you might visit if you’re exploring 4th of July ghosts in Philadelphia, “the City of Brotherly Love.”

The second half was filmed at Eastern State Penitentiary. That’s not a surprise; it’s one of America’s most haunted places.

Next, here’s another video featuring some interesting Pennsylvania haunts. The state is large, so most of these sites aren’t actually in Philadelphia. Still, if you’re in Pennsylvania, some of these ghost stories are interesting and could be worth checking out.

Most Haunted Places In Pennsylvania

Join me as I show you the ten most haunted places in the 2nd state! SUBSCRIBE FOR MORE PARANORMAL ACTIVITY!

Centralia (PA) is over two hours from Philadelphia. Also, it’s not a place to visit (though it might be haunted). Anyone going there is risking his life; it’s not worth taking that chance.

(I want to make it very clear: I advise against going anywhere near Centralia, for any reason.)

Centralia’s story is both horrifying and compelling. I’m not sure any city or ghost town has a similar history. (I hope not, anyway.)

A YouTube video – removed as of 2019 –  showed what’s left of Centralia. (If you know the video’s new URL, leave a comment so I can link to it.)

I thought the scene showing coal residue in the foreground – and a wind farm in the distance – was especially eerie.

I don’t know if ghosts will linger there, long enough for investigators who’ll visit when Centralia is finally safe. It seems unlikely. (For example, I haven’t heard any trustworthy ghost stories about Pompeii.)

Still, if we’re talking about creepy places in Pennsylvania, Centralia has to be on the top 10 list.

Even More Ghosts in Pennsylvania 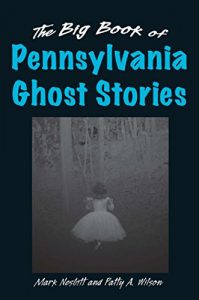 Do you love true ghost stories?

If you’d like to discover more haunted places in Pennsylvania, here’s one book on the subject, and it has some favorable reviews.

It’s loaded with ghost stories about Gettysburg, but you’ll find other interesting locations in it, too.

If you post a YouTube video showing your paranormal Philadelphia investigations, let me know. When I looked for some  to share with readers, I was astonished at how few good, Philadelphia ghost videos are online.

In a historical city like Philadelphia, I’d expect far more haunted places… and videos of people exploring them.

(Note: If you’re investigating rural Pennsylvania, remember that the “Snallygaster” legend – probably more cryptozoology than ghost – is recorded there, as well as in Maryland.)