In “Guildford ghost hunt” (video below), two members of the Ghostfinder Paranormal Society and a media team investigate a Guildford location related to an interesting — and potentially paranormal — photograph.  In this 7-minute video, they identify enough odd activity to make this a location worth further research.  The historical location makes this site especially intriguing. 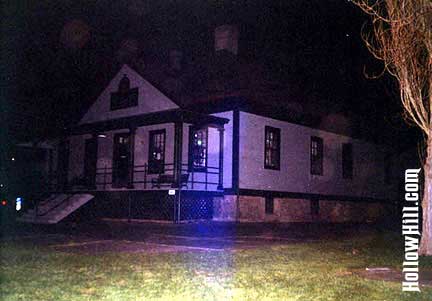 A few things stand out in that video.  Initially, I was intrigued by the Guildford photo because it reminds me of my 2003 “man in blue”  photo from near Seattle, Washington (USA).   That’s it, on the right.

A second, similar Guildford photo — seen later in the video — raises more questions about the British pictures as well as the site.

However, I was ready to dismiss this ghost video as too amateurish when I saw the K-II meter spike while the non-contact thermometer was nearby. The spikes occurred again when some other equipment, perhaps a voice recorder, seemed very close to the K-II.

I know how easy it is to be so fixated on the K-II (or any other research tool) that you don’t notice the nearby objects that — because they contain batteries and use electricity — can cause EMF spikes.  It’s pretty embarrassing when that confusion occurs in front of media representatives.

The camera angle made it difficult to be sure how close the equipment was, but it was enough to raise an eyebrow.

But then, at the 5:17 mark, we see the K-II meter propped next to the voice recorder… and the K-II isn’t reacting to the recorder.  So, that may debunk my theory that the K-II spikes were caused by nearby devices.

Another point in favor of the site being active is: The video camera lost all power, though the batteries had been fully charged before the filming.  That’s not normal.  Though it’s not conclusively paranormal on its own, batteries losing power can indicate a haunted site.

Finally, this video seems authentic because most of the activity appeared to be at a location distant from where the photos were taken.  If the researchers had been too suggestible, they’d have discovered “ghostly activity” at or near the photo location.  After all, that would have been great TV.

Instead, the activity was in another spot.  Was it related to the photo they were investigating?  The figure moved from one location to another in the two photos displayed, so the K-II readings and cold sensations could be related to whatever caused those photo images.

Or, it could be something else altogether.

This isn’t a truly unique video, though I liked the suggestion of a noose at the possible “hanging tree.”  So, it ranks low in that category.  (That’s not necessarily a bad thing.  When people get too original with their videos, it sets off the skeptic alarms.  Credibility, not creativity, is most important to ghost hunters.)

And, though I was ready to give this a single star for credibility (due to the proximity of the K-II and other handheld devices), the later shot of the K-II (next to the voice recorder) increased the credibility significantly.