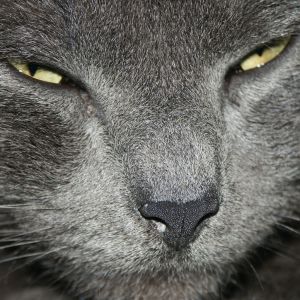 After years of researching ghosts in the northeast, I enjoy visiting Blood Cemetery (aka Pine Hill Cemetery) in Hollis, NH.

The evening before Halloween night in 1999, the sunset was magnificent. It was a warm evening, and it seemed a fine time for some photos at Blood Cemetery.

Since this ancient New England cemetery is on a hill, its headstones can look magnificent — or eerie — against a colorful sky.

Everything was fine until I was about halfway through my roll of film. The light was starting to fade, and my attention was drawn to an area just east of the Farley family graves.

Looking through my camera’s viewfinder, I was dismayed to see something greyish move between me and one of the headstones. It had very fuzzy edges, and it was the same color as the headstone.

I waited for it to move out of the way so that I could take more photographs.

Then, as I watched, it vanished into the headstone.

I nearly dropped my camera.

Really. It vanished. It took about half a second for the image to completely disappear.

It went into one of those half-tall headstones. (It was not a child’s marker, as I found out when I returned on November 1st. The link to that story is at the bottom of this page.)

The grave is near the center of the cemetery. There is no way an animal could leave the graveyard without being seen, even at dusk. The cemetery isn’t that large, and a wide grassy area surrounds the headstones.

Plus that, the stone that it vanished into is one of the smaller stones in the cemetery. There wasn’t any place for an animal to hide.

(I looked, just in case. I really wanted a reasonable, logical, normal explanation.)

I saw the remains of a faerie ring a few feet away, but that’s all.

Over 15 years later, I still ask myself: Why did I think it was a cat?

It would have been a very large cat. It was about 2 1/2 feet tall, and I’m not certain how wide. It was big. It was very fuzzy around the edges, which — from a logical (perhaps skeptical) viewpoint — suggested a massive Angora-type cat that had just been rolling in the dust so his fur was standing up.

It was too “fluffy” (fuzzy-edged) to be a dog. And, it was far too large for any other kind of grey-colored field or domestic animal.

Too late, I realized that I’d seen… a ghost?

I don’t know. Maybe. I don’t know what else it could have been. But I took a few photos anyway, just in case. (They didn’t reveal anything startling.)

Since then, I’ve promised myself that I will never not take a photo, when something unexpected shows up at a cemetery or any haunted site.

But, about 24 hours later, my Halloween night experience was even stranger.  It’s in the next article:  Ghostly Mischief on Halloween Night