Our first investigation at Gilson Road Cemetery, Nashua, NH was in 1999.  I promptly started telling people about this great research location for ghost hunters… not that there were a lot of ghost hunters back in 1999.

In fact, I think there were about five of us with large-ish ghost hunting websites in the mid-1990s. My site was HollowHill.com. (Others included: The Shadowlands site, which listed lots of haunted locations. I think TAPS was online, plus one or two other ghost hunting sites.)

The following photo was among the most dramatic I’d seen in those early years.

In the dozen years or so that followed, Gilson Road Cemetery became enormously popular as a haunted site for paranormal research.  Today, ghost hunters visit the cemetery — day and night — almost every day of the year, when the weather isn’t too rainy or cold. 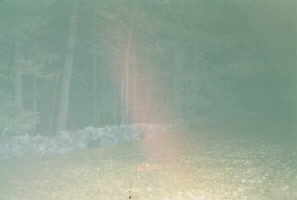 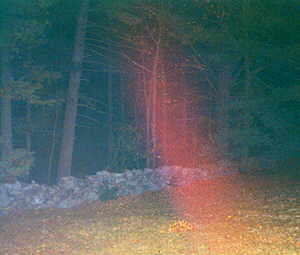 Above: Same photo, with contrast increased.

This photo is one of seven taken after dark at Gilson Road Cemetery on Oct 13th, 2001, at about 7:30 p.m. It is one of four with this color streak across them.

Examining the film makes this a credible anomaly. The sweep of color does not extend beyond the frame on the negative. There is no evidence of tampering with the film, and nothing splashed across it.