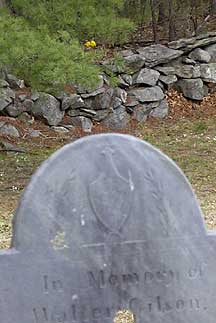 In 2016, over 15 years later, Gilson is still one of the richest, most reliable sites for ghost hunting.

Gilson Road Cemetery is one of New Hampshire’s most haunted locations. As one ghost researcher wrote to us late in 2007, “I am a Psychic and Medium and I have NEVER experienced so much paranormal activity.”

From the moment we first heard local legends about Gilson Road Cemetery, we were intrigued. That’s when it was still an isolated cemetery, far from streetlights and surrounded by dense trees on both sides of the road. The nearest house was at least 1/4 mile away.

Despite its isolation – and partly because of it – Gilson Road Cemetery became the focus of our research, and an ideal place to test new equipment and train new investigators.

In the years that followed, the road was lowered, a subdivision moved in across the street, and the surroundings were landscaped. Due to our online reports, Gilson Road Cemetery became a popular spot for visitors looking for a “good scare.”

This page and those that follow describe what Gilson Road Cemetery was like during our early, formal investigations.

For privacy, I have changed the names of most of the people who visited the cemetery with me on 5 November 1999:

Alan, then a second-degree Black Belt karate instructor with a casual interest in ghosts. Ordinarily he has nerves of steel and a quick sense of humor. He’s the one who knew the most about this cemetery.

Jane, friend of Alan. At the time, she was a sophomore in college, and a skeptic who wanted to know more about the paranormal.

Nancy, professional photographer, 46-year-old mother of Alice. She was interested in the paranormal and intrigued by my “ghost photos,” but definitely not psychic. Or so she said, anyway.

Alice, a high school student who reminded us of a delighted “Alice in Wonderland.” She’s psychically gifted.

James, then a high school student. (He’s my son, and he’s relieved that I use a pen name.)  Mostly a skeptic, he notices “odd” things and seeks rational explanations for them.  Sometimes, his skepticism irks me, but I’m sure he’d say that I annoy him even more often.  I love him more than words can say.

When Alan first told me about haunted Gilson Road Cemetery, it sounded intriguing. He’d been there one eerie Halloween night several years ago. Since then he’d heard stories about the haunted history of the site. Almost everyone loves a good “ghost story,” and this sounded like a great place to explore.

On the afternoon of November 5th, Alan drove Jane and me to the cemetery, about fifteen minutes from my house. The cemetery was small, a little too quiet, and – in 1999 – it was in a very rural location. The oddest thing was, the stone wall surrounding the graveyard was far too large for the sparse number of stones in it. 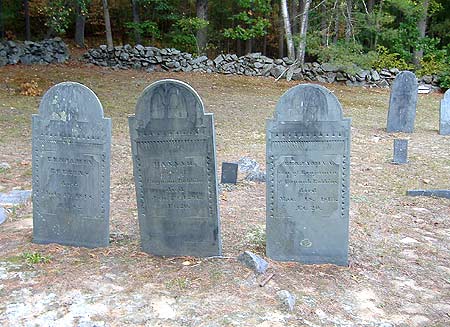 I later learned that most of the graves in the cemetery aren’t marked.

Alan had heard that a home had been there in Colonial times, and murders had taken place in the home or at least nearby. Then the house had burned to the ground, and the local residents decided it was wisest to use the land as a cemetery rather than try building on it again.

The afternoon we visited the Gilson Road Cemetery, the sun was shining. It was an unusually warm afternoon for so late in the year, and we should have had a fun time wandering among the fallen leaves and ancient headstones. It was a lovely setting.

Jane seemed to have the most fun. She joked and laughed happily, reading the very Gothic notes on the headstones. However, her humor became sarcastic and a little too loud as we continued to explore the 18th- and 19th-century headstone. Was she nervous, or just caught up in the moment?

At first, Alan and I went along with Jane’s high spirits. Soon, I felt uncomfortable, and then edgy. Something was very, very wrong about that cemetery, and I could practically grasp the antagonism I began to feel, eminating from the air around me as Jane continued to joke.

I took a few photographs, and we left. I felt very uneasy about the experience, but made excuses to myself. After all, it was a very old cemetery. The odd hole in one headstone seemed kind of creepy; perhaps that had unnerved me more than it should have. Well, that’s what I told myself.

Later that night, six of us returned to the cemetery, to try some night photography. I had shaken off my earlier uneasiness, and when our group gathered to drive to the cemetery, we were in the mood for a fun evening hike.

It turned out very differently.

Next, Alan encounters something unusual, and Jane learns not to joke in cemeteries