Starting in 1999, several of us continued to visit Gilson Road Cemetery regularly, sometimes several times a week during good weather. Though the site is more active sometimes than others, it’s been a consistently good place to train new investigators, and to test EMF meters and other equipment. 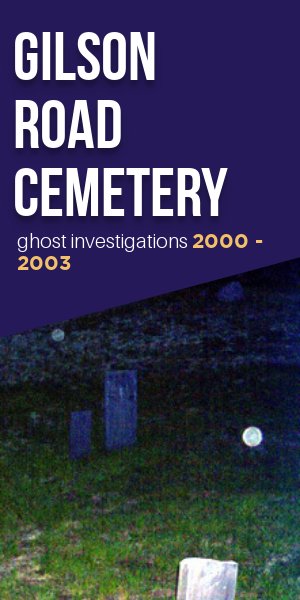 These are a few notes from 2000 – 2003. After that, we stopped reporting our investigations at Gilson Road.

Frankly, very little changed during those years. We still encounter a wide range of phenomena, including strange lights, noises, and voices that only our clairaudient researchers hear. Our photos show unexplained orbs, weird streaks of light, and misty images on dry evenings.

Results: EMF activity. The energy at Gilson started dropping as soon as the construction work began across the street from the cemetery.

However, we did a more formal investigation of the site on Walpurgis, April 30th.

The results were inconclusive. There were no clear patterns to the experiments with pendulums. Our main EMF meter flared dramatically throughout the southern half of the cemetery for several minutes, the meter did not react the same way during our follow-up visit the next day.

(During EMF flares, we routinely check our meters against cell phone activity, cameras that use considerable electricity, and so on. In this case, we could not artificially create the flare.)

Who: Several reporters, casual investigators, photographers, and one ghost hunter from Hollow Hill.

When: Arrived at about 6 p.m., stayed until about 8 p.m. Purpose: Investigation and photographs, for October 27th Nashua Telegraph articles.

Results: Unsettled and inconclusive energy. We hiked into the Gilson area at dusk. The energy was very low. Compass readings by skeptics reached only a 10-degree shift, max. This is still anomalous, but not so exciting as Gilson used to be.

There was a brief and very minor “cold spot” next to one stone. The headstone glowed slightly more than it should have as night arrived, but it was mostly a big disappointment. If I hadn’t been actively looking for these usually-reliable manifestations, I wouldn’t have noticed them at all.

However, the gate glowed more than we’ve seen in the past, well past dark. Maybe they’ve painted it with a more reflective paint?

My “sparkles” camera showed inconsistent sparkles in the woods. Maybe one out of five flashes produced the silvery images. (A year ago, the ratio of successful flashes would have been nine out of ten, or better.) However, the newspaper staff commented about the sparkles in the beam of light from the flash, inside the cemetery walls.

We compared these with flash results from two other cameras and there were no sparkles with them. Even if we try to explain the sparkles as dust motes in the air, they should have appeared consistently with all cameras within, say, a two-minute period.

Listening intuitively, there was far more rustling in the woods. It sounded like people brushing against branches or evergreens. However, even on a psychic level, there were no corresponding sounds of footsteps.

Listening naturally, with one’s ears, the woods were (pardon the pun) dead quiet. Except for an unusually brief serenade by the frogs in the swampy area, there were no animal noises at all. No owls. No birds shifting weight as they slept. No scampering little animals, even at dusk. It was eerie. Usually, there are far more natural noises at Gilson.

Mostly, the visit was uneventful. The gate creaked and moaned once; it’s never made a sound in the past. Branches fell in the woods across the street from the cemetery. A couple of cars raced past the cemetery, illegally, and did not slow down even to look at our flashlights in the cemetery.

At about 7:30 p.m., something felt very wrong when the photographer was setting up his tripod, lights, etc. However, that energy subsided as the evening progressed. My impression in hindsight is, perhaps a spirit was nervous about what we were going to do, and then calmed down once it was obvious that we weren’t malicious.

As Tanglewood Estates (the new subdivision) moved in across the street, accessibility to Gilson Road became an issue. In addition, the energy would surge one week and then drop the next. Sometimes it seemed more haunted than ever, and then we were convinced that the ghosts had left.However, during 2002, the energy seemed to stabilize. If anything, it seemed as if Gilson Road was more haunted than it had been before the construction.

Gilson is still a “sure thing” or as close as it gets, at least for anomalous activity with a compass, day or night. Any hiking-type compass will work. We’ve had success with an L.L.Bean zipper-pull compass (but not cheaper counterparts), and with the $8 Coleman compass available at Target and WalMart. What’s key is to make certain the needle doesn’t tend to “stick” as it floats. Also, be certain to pause if the needle swings, so it’s not a false reading from simply motion as you walk. Make certain you’re holding the compass level, too. Walk through the cemetery and watch north seem to shift directions, from ten degrees on a tame day, up to 90 degrees on a high-energy day.

You can do this at any time of day, but the later in the day, the better the results. You’re likely to get positive results anywhere in the cemetery. The “hot” compass regions seem to change from one day to the next.

We find the most consistent anomalies in the vicinity of the Walter Gilson stone (with the hole in it), near the break in the stone wall (back left corner of the cemetery, which people seem either repelled by, or drawn to), and towards the left front of the cemetery.

By contrast, the EMF meter reads most often at the headstones nearest the gate.

Reminder: When visiting any isolated spot — but particularly cemeteries frequented by teens who are drinking — it’s never wise to go ghost hunting alone.

We’ve said it often: The biggest risk for ghost hunters is not the dead, but the living. Gilson Road Cemetery is no exception.