The road to Gilson Road Cemetery winds through residential and rural sections of southern Nashua, New Hampshire. It seemed familiar and straightforward that night, since Alan, Jane and I had been there earlier in the day. 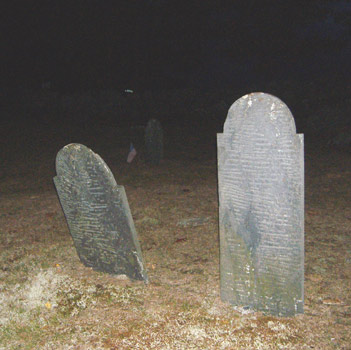 We parked our cars off the road, at the north end of the cemetery. I was amazed at how dark it was without streetlights on that moonless night. It was about a half mile to the nearest house, and few cars travel that road at night.

(This was before the subdivision, Tanglewood Estates, was built across the street from Gilson Road Cemetery.)

There was a gate at the southern end of Gilson Road Cemetery, but a low stone wall sat nearer to our cars. It seemed silly to stumble in the dark to the gate when could just climb over the wall and enter the cemetery that way.

We were barely over the wall when I heard Alan inhale sharply. He paused for a few moments, and then dashed into the cemetery as if chasing a runaway puppy. I shook my head over this, and slid the lens cover off one of my two cameras.

I began taking photos at the north end of the cemetery. Nancy disappeared into the murky darkness, running her hands over the headstones as she walked. A few minutes later, I saw her camera flash at the southern end of the cemetery. I remember smiling, because I knew Nancy had found something that interested her.

My son, James, was with Alice and Jane. Alice seemed nervous. Jane was not quite as boisterous as she’d been earlier in the day. Perhaps it was because every hole and fallen branch in the cemetery seemed to find her as she stumbled in the dark.

“Payback,” I sighed to myself, remembering her earlier jokes. Nobody else was stumbling the way that Jane was.

Jane led the others towards Alan, in the center of the cemetery. Once my eyes became accustomed to the darkness, I could see the outlines of my companions, and sometimes their pale faces would catch what little light there was.

I continued to take photos, knowing that ghost photography is often a matter of numbers: If you take 100 photos in a good, old cemetery, you’ll probably have at least one or two “anomaly” photos in the group. It almost doesn’t matter what you photograph. If you take enough pictures, some of them will have anomalies.

We were at Gilson Road Cemetery for about 20 minutes when James approached me quietly. He said, “I think we should be heading home soon. Alan looks like he’s going to be sick.”

I walked over to Alan. He didn’t look right. In the darkness, it was impossible to tell whether he was pale or rosy-cheeked, but his expression looked pained.

“Yeah, I’m fine,” he lied. “Well, sort of…” His expression made it clear that he wasn’t ready to talk about it.

Next: No, he wasn’t fine. Something was definitely going on.