Alan looked a little dazed, but I didn’t plan to be at the cemetery much longer. I left him and continued taking photos.

Then the sparkles started. I’d heard from other ghost photographers that, when the flash goes off, haunted cemeteries often manifest something like an array of twinkling lights. I never expected to see it. 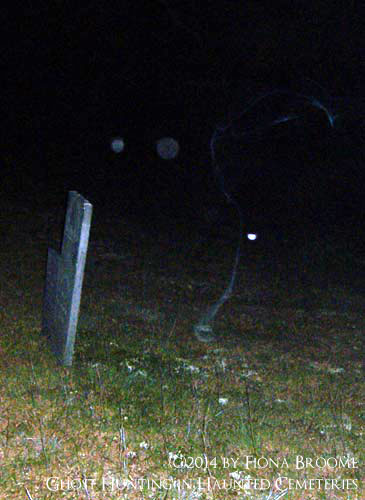 At least half the time that my flash went off, I saw an amazing display of sparkling lights in the woods at the back of the cemetery. At first, I thought it was wet leaves reflecting the bright light of the flash. Then I realized that we hadn’t had rain in several days. Besides, these weren’t quite like reflections anyway.

I took over three rolls of film that night, and when I saw the sparkles, it was like fireworks. Not the initial bright flash, but after the fireworks have exploded, and the remaining bits sparkle as they fall towards earth. That’s what it was like, looking through my viewfinder as I took each photo.

A few times, I didn’t look through the viewfinder, but just held the camera up and clicked. I still saw dozens of twinkling and sparkling lights in the woods around us. Some were about the size of a baseball, others were the size of a 1950’s Christmas tree bulb. The colors varied. They were white, bluish white, and pink-white. They faded slowly after each flash, as they fell towards earth. It was gorgeous, silent, and reliable: At least half the time I took a picture, I’d see the sparkles.

These were at least 20 – 30 feet away from us, in the woods in back of the cemetery. The lights weren’t bugs, pollen or dust in the line of the flash.

Jane saw the sparkles too, but not as often as I did. I think Alice did. Nancy and James did not.

I was a little concerned about him, but my goal was to take as many photos as possible. Besides, I was enchanted by the sparkling lights.

James indicated one headstone that he had a “good feeling” about, so I took three photos of it, one right after the other. Later it turned out that he was right. Every one of those photos has a great anomaly in it.

A few minutes later… I don’t know what it was. It was like a train had just passed me at an underground rail station, but the air hadn’t moved. I took a couple of photos, and I remember seeing something different and saying, “Whoa! What was that?” But I don’t recall what I experienced.

Then Alan returned from another one of his trips to the back of the cemetery. I took his photo as he walked towards me, just in case I’d capture something in that photo, too.

When the photos were developed, I was very glad that I’d done this.

THICK, HEAVY ENERGY FIELDS AT THE BACK OF THE CEMETERY

“You’re going to come with me and tell me if I’m going crazy or what,” Alan demanded. It was the first clear thing he’d said all night, and it wasn’t a request, it was an order.

Something was really wrong.

We walked to the back of the cemetery, where a stone wall separated the graveyard from the woods behind it. I remember seeing Nancy to my right, still taking pictures.

About ten feet from the stone wall, I had to slow down. It was as if I was wading through molasses, or at least the shallow end of a swimming pool. To just above my knees, it was if there was a thick energy field dragging at me.

Alan also slowed down. Later, I found out that he’d experienced the same thing.

(This is helpful during investigations. If people do not share what they’re experiencing until afterwards, it reduces inadvertent “cues” being passed along, triggering an overactive imagination.)

When we reached the back wall, we paused.

Next, we witness a massacre from the past