At that back wall of Gilson Road Cemetery, I was overwhelmed with visual images. 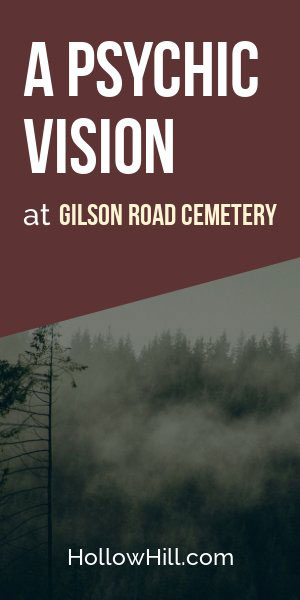 Here’s what I mean when I say that I “see” things like this: When I’m reading a wonderful book, and often when I’m writing, it’s as if there’s a movie in my head.

I never forget that what’s in my head is not what I’m seeing with my physical eyes. But the images I see intuitively, are nearly as clear as if I’d seen them happening right in front of me.

That’s how I “see” things in a spiritual context, too.

So, as I stood at that stone wall, I “saw” carnage. I saw Native people with hatchets or something. There were only about six or seven men close to me, but I knew more were nearby. I didn’t want to look around to see the full panorama.

I also knew there were fallen bodies and a lot of blood on the ground. I didn’t want to look at that either, so I didn’t. I didn’t get the idea that those were settlers on the ground, though. It seemed as if the battle took place when there were settlers in America, but in this vision, the Native Americans weren’t fighting the Colonists, from what little I saw.

Really, after years of dealing with this kind of “second sight,” I generally monitor my field of vision. If it’s too upsetting, I shut it out.

I did that a lot, at Gilson Road Cemetery.

ALAN EXPERIENCED THE BATTLE, TOO

Alan and I stood there for several minutes. I know that I mentioned the killing, the Native people, and that there were people dying as I watched. Most of the violence was already over by that time. Alan nodded, and added things that he perceived. It was a horrific scene we were witnessing, and it was far more vivid than any movie, or news footage.

Nancy approached us, and asked what we were “seeing.” She didn’t experience any of this herself, but she seemed driven to understand what we were feeling. She watched us closely, and asked several questions about what we perceived.

After a few more minutes, we left the massacre and walked back towards the car. The dragging energy slowly released me. Once again, about ten feet from the wall, everything seemed fine. The surroundings looked lighter, sounds were clearer, and the air was fresher.

I turned to look back, and take a few photos of the woods. My camera, usually reliable, jammed. Unlike Halloween night, it wasn’t the flash that failed, but my camera didn’t want to advance. I pushed the rewind button and waited until I could remove the roll of film, which I tossed into my purse.

Alan stayed next to me, and explained that he could hear people talking or whispering nearby. He said that it’s like someone in the next room talking, where you can almost understand what they’re saying, but not quite. He said that he kept turning his head, trying to catch the words, but he couldn’t quite understand them. He said it was annoying.

I didn’t hear anything. I was still overwhelmed by the visual imagery I’d experienced. We walked back to the cars, and I paused to see what the others were doing.

By now, James, Jane, and Alice were at our cars.

Jane muttered something about there being people – not ghosts, but real people – in the woods across the street. She could hear their voices, she said. I asked if they were making a lot of noise and she said no.

She seemed convinced that they were going to bother us, and she seemed very agitated. She insisted that we had to leave immediately.

I remember thinking how it was all her imagination. If any living people were out there, they’d either have flashlights or they’d be making a tremendous amount of noise, tripping over fallen branches in the dark. I didn’t hear or see anything. I took a few photos of that area, just in case.

Alice was in her mother’s car and determined to stay there. I’m still not certain what she experienced at Gilson Road Cemetery, but she was clearly shaken. Illuminated by only the dim interior light in her car, I could see that Alice looked unnaturally pale and her eyes were too shiny.

Not everyone deals well with profound hauntings. That’s sensible. Sometimes I think that ghost hunters are foolhardy.

Or, perhaps Alice had a premonition of something that would happen soon.

James looked like he was trying to make sense of it, but he is a very level-headed kid… and generally a skeptic. He’s been around intensely psychic experiences, and he knows that nothing terrible happens in most cases. In a way, I think he enjoyed being the one that the others could rely on.

I glanced back at my own car. Alan was leaning on the trunk, as if he’d just run the Marathon. He slowly stood up and said something about having had enough for one night. I opened my car door, planning to leave before anyone really fell apart, and I saw a flash of light.

Nancy was still happily in the cemetery, taking pictures.

I said, “Just a few more photos,” and left to join her.

Next:  A few more photos, and then the aftermath