Purpose: To use disposable cameras (one for each person) and random photos. Goal was to estimate how many “ghost photos” a beginner can expect, using the cheapest disposable camera available, with almost no how-to instructions, and on a random night…which turned out to be too damp for reliable results. 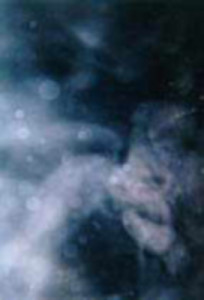 Results: Many ghost photographs. Averaged three anomaly photos per roll of 27 pictures. Orbs were discounted due to damp conditions. Anomalies included unexplained lights, particularly a blue line in two of Alan’s photos that corresponded to similar lines in my photos and one other person’s pictures, as well. Other anomalies included some odd mists.

The best photos of the night were a dense mist rising from near two graves, and a baffling, swirling mist at another grave.

Purpose: To use spray bottle of water to try to duplicate the damp conditions of the 26th, and compare with “dry” photos taken at same time on the 28th.

Results: Active entity present. There was some other energy present, like something there for dinner. It wanted us to leave, so we did. Telepathic communication was almost verbal, “Get out. Get out NOW.”

On 6 Dec, some of the photos were printed. The two I took when I was getting that telepathic message, have a purple smear across them, similar to the photo I use on the opening page of this website. (It’s not a light leak; I was using a different camera, and the light doesn’t extend outside the frame.)

Purpose: To check the energy levels, and take a few photos.

Results: Numerous active anomalies. Strong sulphur smell in area, probably from swamp. Something grazed the edge of my hat, sounding like a higher-pitched bumblebee, and much faster. I could feel the heat from it as it passed. Left no mark on my polarfleece hat. No other sound before, during, or after it passed.

Alan’s brand new flashlight dimmed, flickered, and then went out as if the batteries had died. It was fine immediately before and after the cemetery visit, even when we tried to make it fail again.

No significant energy, even at the back wall of the cemetery. Quite flat, in fact. Like almost every other sort-of-haunted cemetery. Nothing remarkable.

My cameras recorded some odd light effects, but I’m 90% certain it was a glitch at the camera lab. It affected four photos in a row, almost identically.

Who: Four of us When: Noon

Results: The vicinity of certain graves remains the most active for non-orb anomalies. However, photos taken near the wall itself were not productive.

Purpose: Felt drawn to the cemetery

Results: Many anomalies. Rampant spectral activity. Whispered warning from entity. Found an unexplained warm spot over a depression/grave near the Lawrences’. Police asked group to leave, and waited while they did.

We’ve agreed to stay away from this cemetery at night, for awhile at least.

We didn’t visit Gilson again, but met a young woman who’d been there with friends about two months ago. After her nighttime visit to Gilson, she’d told several mutual friends the story she told me: She saw the black shape of a man in a hood rushing towards her and her friends, and then he vanished. The girls left the cemetery, screaming in terror. This matches with a story from about two weeks ago, when two other ghost hunters encountered an entity described as a black shape like a man in a hooded garment.

It could also be the nighttime appearance of the man that I saw during the day on November 25th. I was thinking along Colonial lines, so I described him as wearing a brown-black capote (hooded garment).