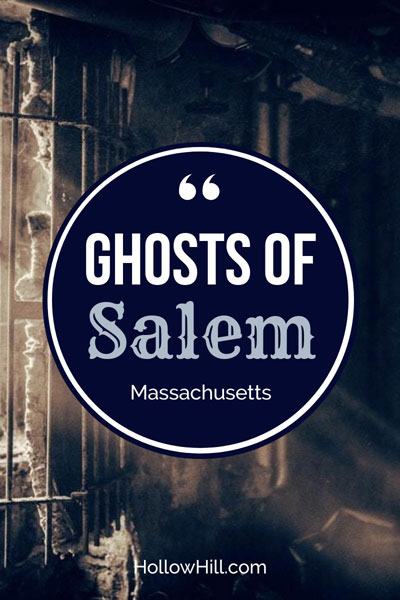 Salem is haunted. Not just by the ghosts of the Salem Witch Trials, but by other troubled spirits as well.

I grew up not far from Salem.

So, I’m familiar with its ghosts… the ones people talk about, as well as they ones they don’t.

From 2008 through 2010, I researched on-site, discovering a wealth of hidden ghost stories related to Salem and the city’s famous Witch Trials.

(Of course, it helps that I’m descended from two 17th-century Salem families. Perhaps I have additional resonance with the spirits of Salem.)

Three very narrow and straight ley lines connect 90% of the hauntings around Salem. They predict where strange things will happen, usually within a few yards.

In the future, I hope to write a book about this fascinating topic.

In the meantime, I’m happy to share some of my research with you.

Gallows Hill – So far, no one knows where the real “gallows hill” was, where the witches were hung and their bodies discarded. However, the namesake location is worth visiting (if only to say you’ve been there) and may offer some research opportunities.

Witch Hill (aka Whipple Hill) – One of the most infamous locations connected with apparent “witch” activity in Salem Village. It’s also one of the loveliest and eeriest sites for ghost hunting.

GhoStock 7 Report: Salem Inn – A brief summary of my 2009 investigation at one of Salem’s most charmingly haunted inns.

Book ETA: Unknown. Discussions have stalled with my publisher, and my contract prohibits me from writing this book for any other publishing house.