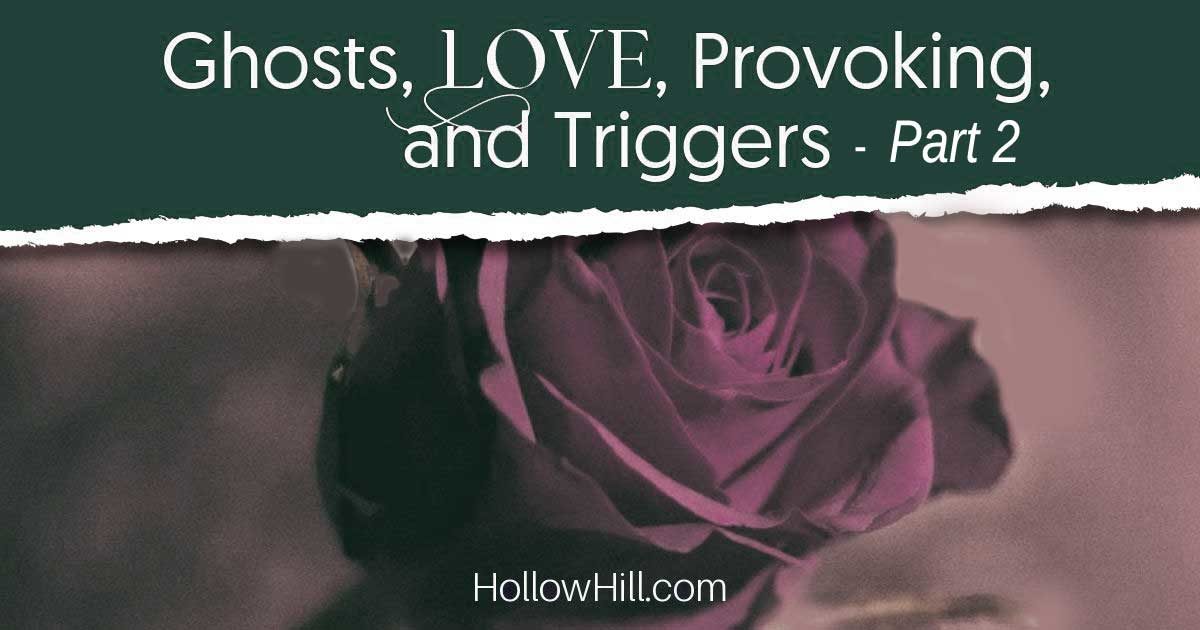 In Part 1 of this article, you learned about:

Now, let’s talk about the extras that can make a difference, and how to put all of this information to good use.

You may find additional clues in historical records. Look for wills, diaries, court records, and newspaper stories – including obituaries – related to the site and the people who lived and died there.

You may need to research the locations and people, offline, at public libraries and county courthouses.

But, if you’re researching someone famous, online resources can be a goldmine. For example, many diaries are already online. (Some of the largest and oldest collections are at The Diary Junction and the British Library.)

Double-check and cross-reference everything. That’s especially true if you use genealogical records, newspaper articles, or 19th-century anthologies of biographies or histories.

The number of historical resources can be overwhelming. If you have the likely ghost’s full name and it was a real person, start by searching online for “genealogy [person’s name].”

Tip: Ancestry.com is great, but it requires a paid membership, and – even then – some submitted records can be really wrong. You’ll find many free alternatives, and can use them to piece together your ghost’s history.

Try Cyndi’s List: UK Resources / US Resources, and so on.

Near the haunted site, you may find many useful records. For example, visit local cemeteries. See the artwork and inscriptions on gravestones that might be related to the site’s ghost.

This kind of research can be the most time-consuming, but also the most helpful if you want a successful ghost investigation.

Tip: If your ghost was a prominent person, check Find A Grave to locate where he or she is buried.

Assemble the Information, and Test It

Next, put all of the information together. 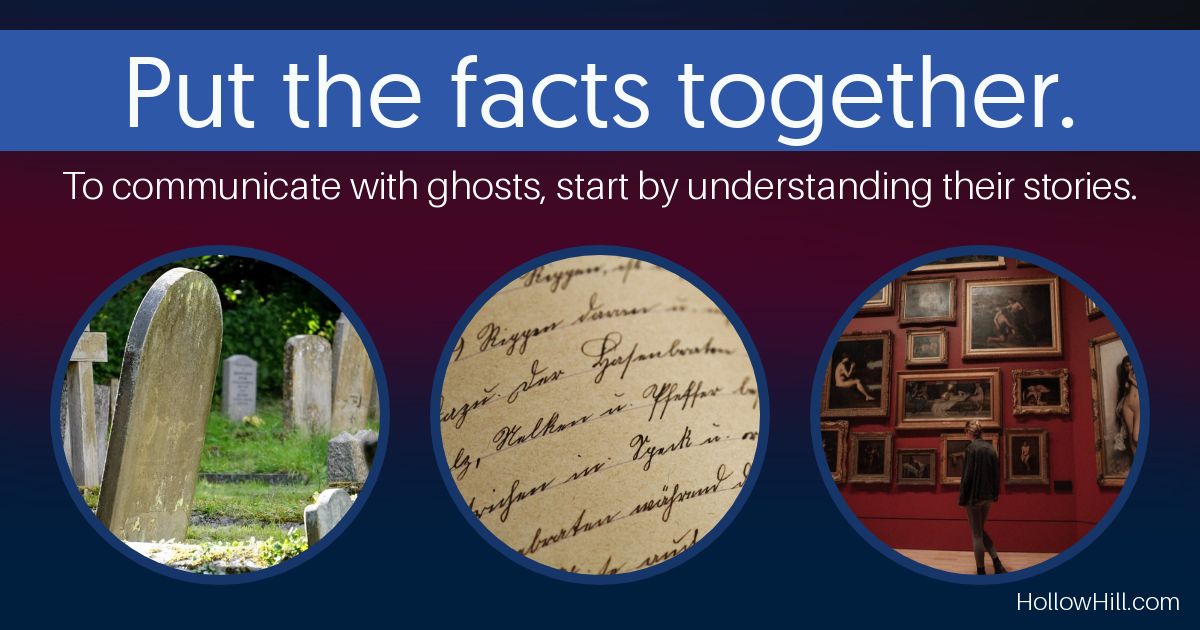 If you’re lucky, you may have a fuller picture of your ghost’s life, from birth to death. He (or she) may even remind you of someone you’ve met, or a ghost from another haunted site.

Or, your research might point to multiple ghosts at the site, or residual energy hauntings.

Now, you have names and events to work with. You can use them for real-time communications to establish rapport, or to trigger ghostly activity and interaction.

Maybe you’ve learned that the husband, Thomas, died young from “consumption.” (Usually tuberculosis.) You’ve also learned that he was engaged to Sarah, but he died about a month before the scheduled wedding.

Try saying it two different ways. First, ask it the same as a clerk in a store might say it. Let it roll off your tongue, like you say it a hundred times a day. Weirdly, that can elicit the most immediate response.

If that doesn’t work, try a second, more consoling tone of voice. Lean forward and look interested, in case the ghost can see you; body language matters.

That simple question can be enough to start a dialogue with the ghost.

Be sympathetic rather than provoking. Kindness works. 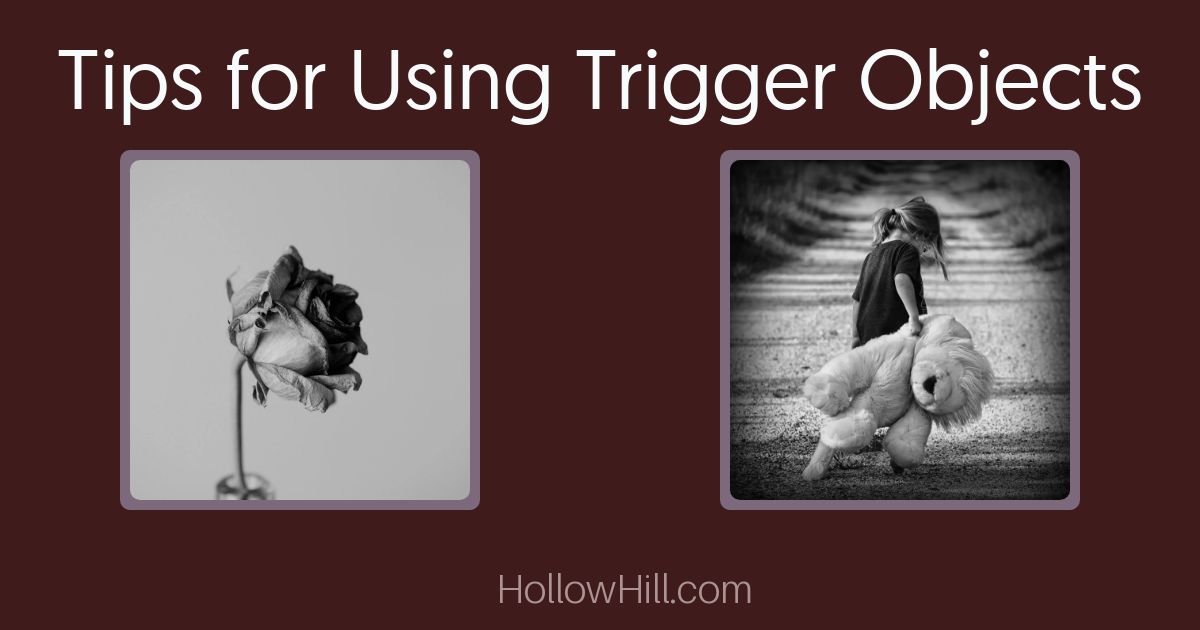 Trigger objects – including everyday household items from the ghost’s era – may be useful.

People often think about bringing flowers to a grave, or a toy when the ghost is a child.

These can be useful in some settings.

During the 19th century, and sometimes earlier, many homes had a Bible. The ghost may respond to it. If you bring a Bible with you, make sure it doesn’t look modern. Black or brown covers were typical, and – when a family could afford an embossed Bible – the letters were usually gold.

Tip: If you read from it, your safest choice is a King James Bible, not a recent translation. (Prior to James I, only wealthy families and clergy owned Bibles. And, until 1782, the King James Bible was under a form of copyright, so some families didn’t – or wouldn’t – own them.)

But this is important: If you’re investigating an early American home, the Geneva Bible or Luther’s German Bible may trigger better responses.  In fact, ghosts of Pilgrims may feel uneasy if you read from the King James Bible.

Think about the class level of the ghost, and what kind of objects they might love to see again. Something beloved by a “downstairs” maid might be very different from an object that will trigger responses from the lady of the house.

However, think twice before bringing the ghost what he or she might think is a gift.  When you reveal it to the ghost, explain that it’s yours and you’ll be taking it home. You just wanted him/her to enjoy it for a short time.

Otherwise, the ghost may feel further betrayed. You gave him (or her) something… and then you took it away, for no reason.

Two things to consider before bringing/leaving gifts for ghosts:

If you’ve already left something you feel that you shouldn’t have, contact the owner or managers of the site. Ask them to remove it, with a kindly explanation – out loud – to the ghost. (If you left something at a cemetery, contact a team that tours it regularly. In most cases, cemetery staff routinely dispose of perishable items every few weeks, anyway.)

Provoking can be useful in extreme situations.

Instead, with more research and closer observation, you might learn enough about the ghost to establish rapport.

Understand who your ghost probably was, and reasons why he or she might remain at the site.

It’s easy to say “unfinished business,” as a catch-all reason. But, with a few hours’ research, you can dig deeper. You may find a personal connection.

That could lead to more productive EVPs, or other communications. As they say, “You catch more flies with honey than with vinegar.”

Also, personalized, real-time communications might help you learn even more about the ghost, to help him or her let go of the past… and move on. It could be a real, productive conversation.

Of course, if the ghost is rather mad and stuck in the past, he or she might respond with anger, once his/her name is known. The ghost might have secrets and fear you’ll expose them. (Perhaps the only reason ghost remains here is to keep his or her secrets concealed.)

Tread carefully if the atmosphere changes and you sense hostility. It may be best to leave, evaluate the evidence and team members’ reports. And then decide you next, best plan for that site.

Smart ghost hunters get better results when they go beyond the “everyone knows” stories, and learn more about the ghosts.

Behind almost every haunting is a story of disappointment. If you know that story, the ghosts are almost certain to respond more quickly and clearly.

Dig into history. Look closely at everything “old” at the site. Ask why it’s there. Is there a story behind it?

Listen to your intuition and pay attention to the mood – the emotional energy – at the site. It can be your biggest clue.

Communications may improve, including EVP and real-time responses through ghost hunting tools.

In most cases, kindness will evoke a far better response – and outcome – than provoking. Given a choice, I think most ghosts would prefer love and understanding rather than antagonism and taunts.

Let me know if you have questions, and also what happens when you try these methods.