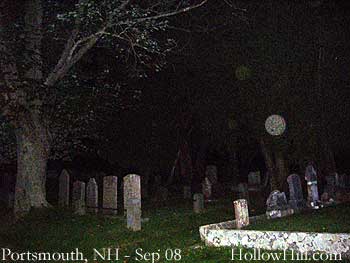 One of the largest and most haunted cemeteries in Portsmouth, NH fits that description.

South Street cemetery isn’t the official name of the location, but it’s what most people call it.  This lovely, slightly eerie cemetery is at the intersection of South Street and Sagamore Avenue, not far from downtown Portsmouth, NH.

Until recently, I hadn’t researched the cemetery very much.  I simply knew the “hot spots” where we usually photograph ghostly anomalies, and where ghost hunters’ dowsing rods detect the strongest paranormal energy.

We always visit the graves just outside the cemetery walls.  Several headstones have been stolen from those sites since my previous visit.  That’s so sad.  However, the raised mounds remain, and they tend to be very good for ghostly phenomena including elevated EMF levels, apparitions and the murmuring sounds of nearby ghosts.

Note: If you visit graves at the wooded perimeter of South Street cemetery, especially at dusk, be sure to go with a group.  Though the police have done a good job of patrolling the area, the woods were sometimes a temporary shelter for homeless people in past years.

Women should be especially cautious near the woods and at the graves just outside the cemetery walls.  There seems to be an unpleasant male entity (ghost) there.

We also pause at one of the crypts, at a couple of locations that students usually describe as “eerie” or “creepy”, and at the smaller entrance on the far side of the cemetery.

The actual history of the cemetery has provided some good reasons why its apparent ghostly “hot spots” are so hot.

For example, our ghost hunting classes generally meet at the main entrance to the cemetery.  It’s near one of the highest points on the north side of the cemetery.  We almost always sense something odd — but also sacred — when we start our ghost investigations there.

Research reveals that the elevated spot is where a gallows stood in the 1700s… a site with some lurid history.

The earliest gallows was a “hanging tree” where two early executions included Penelope Henry and Sarah Simpson, “turned off the back of a cart” in 1739.  (That expression meant that — after standing on a cart positioned beneath the gallows — the cart pulled away, leaving them hanging.)

From my experience, most sites of “hanging trees” tend to be haunted.  People report paranormal activity at or near (within a half block) of the site.

THE UNJUST DEATH OF RUTH BLAY

One of the most gruesome stories is the hanging of Ruth Blay, a 25-year-old schoolteacher.  She was convicted of concealing the death of a newborn, later found to be stillborn.

According to the charges, Ms. Blay had buried the infant beneath loose floorboards in her schoolroom.  The corpse — wrapped in a cloak — was discovered by 5-year-old Betsey Pettengill and some of her friends.

Ruth Blay was immediately “apprehended” by a man named Isaac Brown, who was paid ten pounds (approximately $2000 in 2008 dollars) for his services.

The young schoolteacher’s trial was rushed, and the sentence was harsh, but the people of Portsmouth defended the popular schoolteacher.  Numerous briefs were filed with the British court, requesting a reprieve for Ms. Blay.

Just one chance remained for her pardon on December 30st, 1768, the day that her execution was scheduled, but the sheriff decided not to wait.  In fact, he changed the time of her hanging to an hour earlier than planned, so he wouldn’t be late for dinner that evening.

It was not a popular move.  An angry mob gathered near the gallows.

Likewise, Ruth Blay did not go quietly to her death.  (Note: When I see this in a history, it’s another good reason to look for a ghost.)

According to the legends recorded by journalist C. W. Brewster in the mid-1800s…

“…as Ruth was carried through the streets, her shrieks filled the air. She was dressed in silk, and was driven under the gallows in a cart.”

The crowd shouted angrily as High Sheriff Thomas Packer hastily positioned the cart beneath the gallows.  He looped the noose around Ruth’s neck and then — with a brusque command to the horses — drove the cart away, leaving the young woman’s body swinging from the rope.  Sheriff Packer did not stop to look back.  Instead, he drove the cart to arrive home in time for his meal.  He was apparently unaware that — as he drove away — a rider had arrived at the gallows with an urgent letter.

A stay of execution had been issued by the Royal Governor of New Hampshire, but it arrived minutes after Ms. Blay’s death.  If Packer hadn’t changed the execution hour, Ruth Blay would have lived.

Outraged, a mob marched to the sheriff’s house.  There, they hung an effigy of Packer, and placed beneath it a sign that said,

“Am I to lose my dinner
This woman for to hang?
Come draw away the cart, my boys-
Don’t stop to say amen.”

Then, the crowd carried the effigy through the streets to be sure that every citizen knew of Packer’s cruelty, and finally — according to some versions of the story — burned the effigy in front of his home.

Ruth Blay was buried in an unmarked grave about 300 feet north of the small pond near the middle of South Street cemetery.  That’s the location where we usually record the greatest number of ghostly anomalies in our photos.  It’s also where people first notice that their cameras aren’t working correctly.

(Those cameras are usually fine after people leave the cemetery.  This kind of problem is normal in profoundly haunted settings.)

According to legend, two gravestones glow with spectral light, near Ms. Blay’s burial spot.  We’ve noticed quite a few glowing stones in that vicinity, and they drew comments during our class on Saturday, 13 Sep 2008.

Ruth Blay’s ghost may haunt the site of her death and burial.  Her spirit — and perhaps the baby’s — has also been reported at the site of the schoolhouse, around 94 Main Avenue in south Hampton, NH.

Note: According to state records, Sheriff Packer was responsible for executing the only three women ever hung in New Hampshire.

Similar to Ruth Blay, the other two women — hung on December 27, 1739 (almost exactly 29 years before Ms. Blay’s death) — were convicted of “feloniously concealing the death of infant bastard child.”

The house where the sheriff lived (and ate his dinners on time) was at the northeast corner of State and Court Streets in Portsmouth.  His house became Col. Brewster’s Tavern, which George Washington stayed at for four nights.

In 1813, the house burned to the ground and was replaced by the Treadwell Jenness House, built in 1818.  According to some, that location is haunted.

Sheriff Packer was still in office on June 22nd, 1771, when he died.   Some claim that he was buried in — and haunts — Portsmouth’s North Cemetery.  It’s possible that he does.  However, the North Cemetery gravestone of Thomas Packer (d. 1793) is for one the sheriff’s two sons.

Ruth Blay isn’t the only spirit with a good reason to haunt South Street cemetery.  Two famous murder victims are also interred at the cemetery. 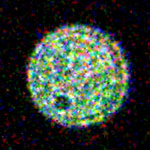 On the night of March 6th, 1873, Norwegian immigrants Karen and Anethe Christensen were murdered on Smuttynose Island in the Isles of Shoals.  Both women were strangled, and one had been assaulted with an ax.  A third woman had been attacked with them, and she identified the murderer as a German immigrant, Louis Wagner.

According to trial evidence, Wagner had rowed out to the island, committed his evil deeds, and then rowed back to the mainland.  He was captured in Boston, but until his hanging in 1875, Wagner maintained that he was innocent.

Since then, many people have speculated about what really happened on the night of the murder.  One of the most famous stories supporting Wagner’s innocence is the best-selling novel, The Weight of Water by Anita Shreve.

Though Wagner was buried in Maine, the graves of the murder victims are in the Harmony Grove section of South Street cemetery.

We haven’t investigated their graves yet, but recommend them to other ghost hunters in the Portsmouth area.  When questions linger after a murder, we often find reports of paranormal activity around the graves.

The first record for Cotton Burial Ground appeared in June 1671:

“It was agreed with Goodman William Cotton to fence the town’s land that lyeth by Goodman Skates, for a trayning place, to cutt down all the trees and bushes and to clear the same from said ground by the first of April next, and for his soe doeing he and his heirs shall have the above feeding and use thereof as a pasture only, for twenty years–and the said land shall still remayne for a trayning field and to bury dead in.”

(The military training field may explain why Sean, one September 2008 student, saw ghostly soldiers marching at the eastern end of the cemetery.)

In the 1850s, after a fire at South Street church, several graves were moved to Proprietors’ Burial Ground, including the 1761 graves of Samuel and Margaret Haven, children of Rev. Samuel Haven.

(When any grave is moved, we quite often note odd, sometimes ghostly energy around the body’s new location.)

In addition, the Cutts-Penhallow family cemetery was moved in 1875 from Green Street to a grove of trees near the center of the South Street property.   Many visitors to the South Street cemetery comment on this peculiar, dark section of the cemetery.  We’re not sure if it’s haunted, but it’s certainly creepy at dusk.

Portsmouth’s South Street cemetery is an ideal location for ghost hunting.  It offers a wide range of paranormal phenomena in a convenient seacoast location about 10 minutes from US 95.

According to the sign at the main entrance, the cemetery closes at 6:30 p.m.

The police patrol the area regularly.  During one of our September 2008 classes, we were stopped by the police.  We explained that we were there to take photos.  One student’s backpack was inspected, before we could continue the class.  (It was only 5 p.m., so I’m not sure why we drew attention.)

However, the cemetery is a popular park for bicyclists, joggers, people walking their dogs, and ghost enthusiasts.  We recommend it for research; the stories in this article barely scratch the surface of the tales that could suggest ghosts.

Wear shoes suited to walking; the cemetery is huge.  Also bring bug spray and a spare camera.  Most of us had camera problems at some point during the evening, and a backup camera was useful.

In addition, if you park in the small lot at Little Harbor Road, be sure to notice the energy as you enter the cemetery. (It’s a slightly wooded entry, sometimes overgrown with vines and branches. Many ghost hunters comment on unique phenomena there.)

An Old Town by the Sea, by Thomas Bailey Aldrich

Re: More info on Ruth Blay, by samanthabalsavage1

Washington’s walk about city put a stir in the crowd, by Amie Plummer, Fosters.com