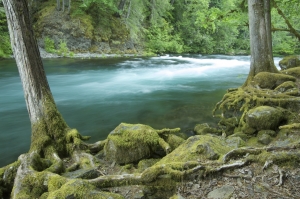 The following isn’t (and wasn’t intended to be)  a ghost hunting video.

And, for those of us who know about the effects of infrasound, the results aren’t a surprise.  However, it’s still a good demo.

This video is important for ghost hunters because of the description Jamie gives as he’s experiencing infrasound.

That’s what you’re looking for, if you suspect infrasound.

Effects will vary from person to person, in terms of intensity and description, but any influence is important as we’re separating what’s normal from what’s paranormal.

Of course, most haunted sites won’t have a sound system generating infrasound.

However, underground streams or other sources of infrasound can affect people at a site. Investigators may interpret it as paranormal, though it’s not.

This is one reason why I recommend checking geological surveys of the area, unless you already know there’s water beneath the site you’re investigating.

This is a question that’s been raised about Gilson Road Cemetery in Nashua, NH.  There is a marshy area in back of the cemetery, and folklore suggest that the land across the street was once underwater.

However, in terms of underground streams within a block of the cemetery… the map doesn’t suggest that.

Of course, more research is necessary, not just in terms of geology, but also other infrasound sources.

Many hauntings — especially at sites like Nashua’s Country Tavern restaurant — seem to have intensely haunted rest rooms.  (Usually, it’s the ladies’ room.  I’m not sure why, unless women are more likely to notice — or talk about — ghostly encounters in bathrooms, while men tend to be more purpose-driven when they visit a rest room.)

So, I’d like to see study results related to water in pipes, as well.

One complication: There may be other connections between water and ghostly activity.  I think Colin Wilson was the one who commented on unexplained water on the floor, in connection with poltergeist activity at the Winchester mansion in California.

Nevertheless, when investigating a house where the owners or tenants are frightened of ghostly phenomena, infrasound may be the normal explanation they need to hear. (No pun intended.)

Originality (because they finally demonstrated the effect, and it took a lot of effort)

Credibility (as a “ghost”)