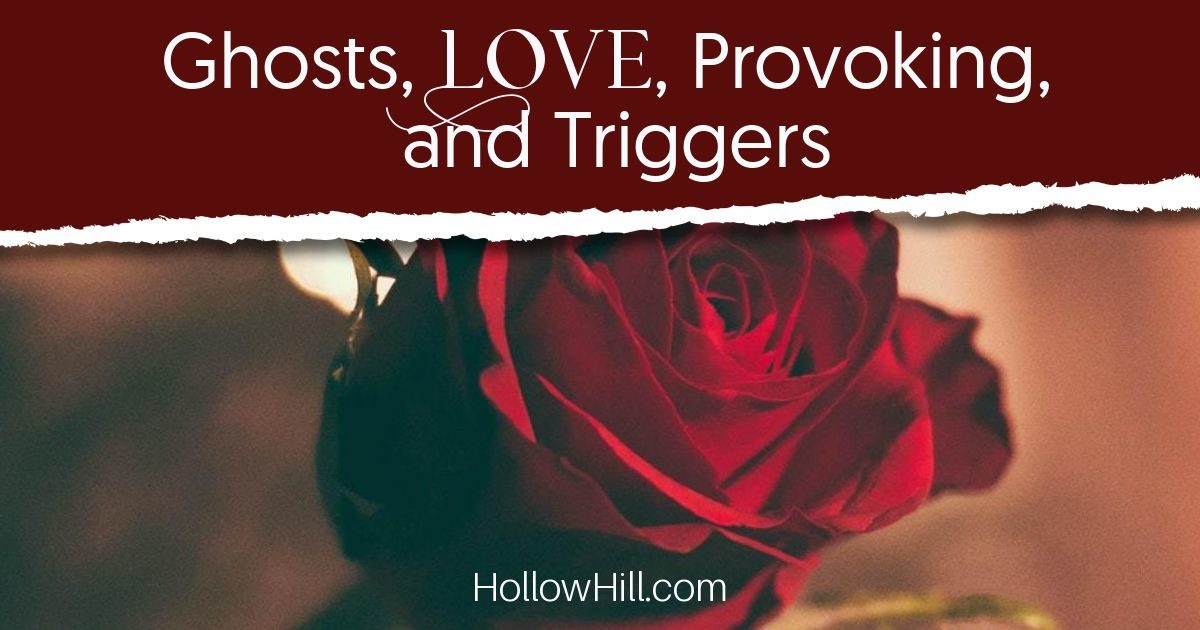 In ghost hunting, provoking works. It’s not very nice, but we’ve seen it work in our own investigations and on TV shows.

As a last-hope effort to see if a site is truly haunted – and help the homeowner – provoking can be justified.

Otherwise…? No. Saying it’s rude or mean would be an understatement.

What if there was another way to trigger ghosts, or even help them find the peace they seek?

At the root of most hauntings, you’ll find stories of love and hate. Understanding them can radically improve your ghost hunting results.

Love and Hate at Haunted Places

Hate is useful for provoking, maybe we need to look deeper.

What so wounded the ghost that he or she became angry, resentful, or even hate-filled? Staying here – instead of crossing over – what situation is he trying to reverse?

By looking one layer deeper, you’ll probably find expectations and love – romantic love, greed (love of money), or trust (relying on someone the ghost trusted).

You might get better ghost hunting results if you appeal to the ghost’s true (or at least earlier), kinder nature.

In this article, you’ll learn a few ways to uncover clues to the full story behind the hauntings.

Both of those can make ghost hunting far more interesting and productive.

Start with the Stories

Every haunted site has a story. That might be an “everyone knows” tale, popular with teens and young adults. Or, you might hear it from a local historian or folklore expert.

Research everything. Some of the best historical resources weren’t available until the last few years. Older ghost stories might be more fiction than fact.

Look for flaws in those stories, such as:

Tip: Sometimes a story is half-true. Don’t toss aside a local legend because one part of never happened. The name or date might be wrong. That’s okay. Even the most bizarre ghost stories can have a kernel of truth.

If there’s more than one tale, choose the one that makes the most sense to you. Choose the one that “feels right” after you visit the site. Your impressions matter. You don’t have to be psychic to sense the energy or emotional tone of the location.

Many ghost hunters are so busy looking for ghostly noises or apparitions, or so focused on their ghost hunting equipment, they miss clues “hiding in plain sight.”

When you arrive at a haunted site, what’s there? What portraits are on the wall? Are any objects really old… and look a little odd in that setting?

If the homeowner or a historian shows you something that belonged to a previous owner, tenant, or visitor, why is it still there? What does it tell you about possible ghosts?

Sometimes, people keep an object – clothing, jewelry, furniture, artwork, books, and so on – that belonged to deceased friends or relatives. There’s usually a story behind it.  I’m not saying the object is haunted, though it might be.

Several times, I’ve noticed a shabby chair or an ugly painting in a home where the rest of their decor was ultra-modern and stylish.

When I’ve asked the homeowner why he or she kept it, the answer is – almost always – “I don’t know why. It just felt wrong to get rid of it… I can’t explain it.”

Usually, that object links to the haunting. It’s part of the ghost’s story.

Some clues are more obvious than others. For example, if you see a pin like the one in the next photo, study it closely.

You might glance at that brooch on top of a dresser or sideboard and think it’s woven fabric or wire.

It’s not. It’s someone’s hair. And that person is dead now.

(Search for “Victorian pictures made from hair.” You’ll see how commonplace this was in the 19th century. And yes, it’s kind of creepy.)

Check it for unusual EMF, and for nearby EVP or hot/cold spots.

In the past, almost every object kept by someone had significance. Remember, before the middle of the 20th century, the average person didn’t own many things.

So, sometimes, that jewelry, portrait, or man’s jacket hanging in a woman’s wardrobe tells an important story.

During an investigation, try asking – out loud – who’s in the painting or photo, or if the item had special meaning for the ghost.

See what reaction you get, if – to the ghost – it looks like you’re about to touch or move the object. (If it’s fragile or you don’t have permission, don’t actually touch it.)

Tip: If you see old portraits at a haunted site, and you’re not sure who they are, take photos. Then use something like Google Image Search to see if the portrait – especially a photo – is online with additional information.

Next week, the second (concluding) part of this article: Historical records, putting it all together, and how to use it.