In addition to my book about Austin’s ghosts, you may enjoy these articles:

But, if you’re ghost hunting in or near Austin, you’ll learn far more from my book. It was the first regional book to describe — with specific details and addresses — ghosts that haunt Austin, Columbus, and nearby communities.

The Ghosts of Austin, Texas, by Fiona Broome.

Discover over 100 haunted locations in and near Austin, Texas. Explore the eerie links between downtown Austin’s ghosts, including the city’s connection with Jack the Ripper, and the creek that keeps on haunting.

Available at Amazon.com and other fine booksellers.

Here’s the photo from the book cover, in more detail: 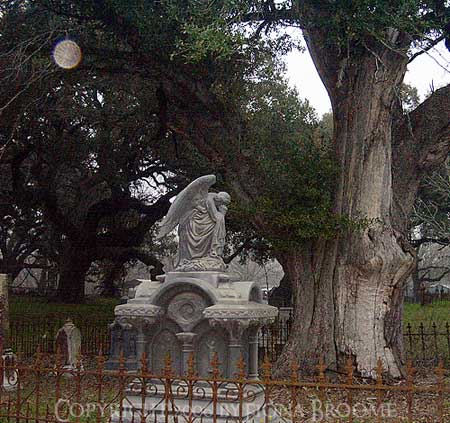 This picture was taken around dawn, and the sun had barely cleared the horizon behind me.

I lightened the picture slightly (but did not alter the contrast or anything else) so you can see the orb and cemetery features more clearly.

That’s an extraordinary anomaly, and it’s one of many from that cemetery.

The following photo was taken the same morning, pointing in the opposite direction. This isn’t a flash photo, either, but it has no orbs. Nevertheless, I think you can see why I like researching at Columbus, Texas. It’s downright eerie. 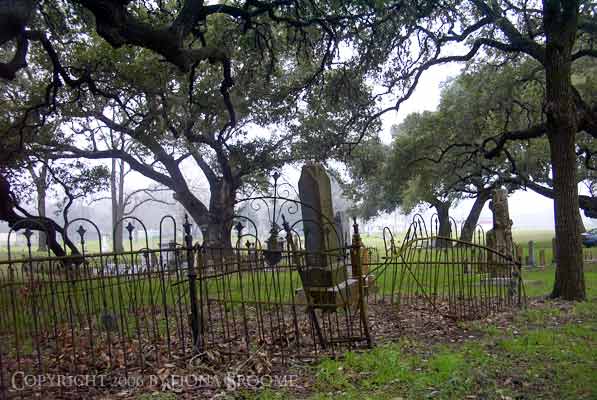 Of course, Columbus is one of many locations in my book, The Ghosts of Austin. The main focus is on Austin, and it offers a wealth of haunted sites.

Oakwood Cemetery is among my favorite public haunts in Texas. It’s a large cemetery near downtown Austin. If you’re ghost hunting in Austin, plan to spend several hours there.

It’s surrounded by a fence you can see through. So, even after dark, you may get some great ghost photos and other evidence. (However, the neighborhood is mostly residential. Please respect their privacy.) 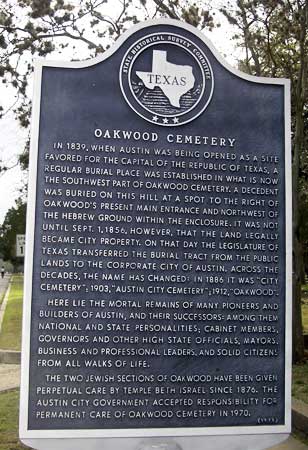 At any cemetery — including Oakwood — I look for grave markers with messages like this one:

“And never suffer me to be separated from thee” is a lovely sentiment. It’s also the kind of inscription that can indicate tragedy or at least deep unhappiness. Both are red flags that can suggest a haunting.

The marker, above, is one of many at Oakwood featuring emotional inscriptions.

Here’s another grave to look for. It’s a very damaged crypt. Any time you see a grave like this, check it for EMF, cold spots, EVP, and photographic anomalies. 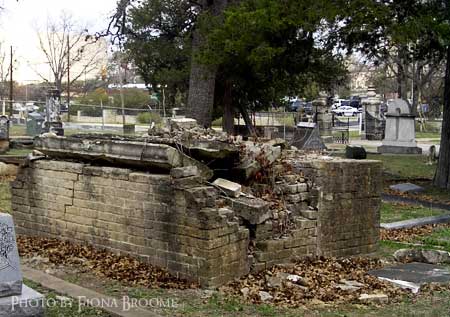 In the following photo, you’ll see a similar, damaged grave in that same cemetery. Where’s the body or the coffin? (I hope it was moved to a safe location, or reburied in the ground beneath the open crypt.)

No matter where the body is, when you see an open grave like this, it’s a place to investigate with care. 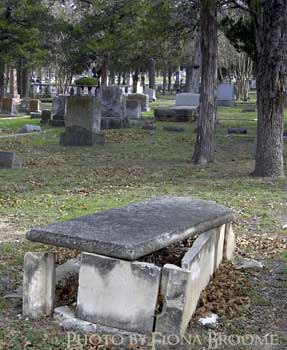 The next photo features an odd family plot at Oakwood Cemetery. I understand the convenience of a low-maintenance grave site. However, this cement-covered plot is so unusual, I look at and wonder, “Are they trying to be sure everyone stays in their coffins?” 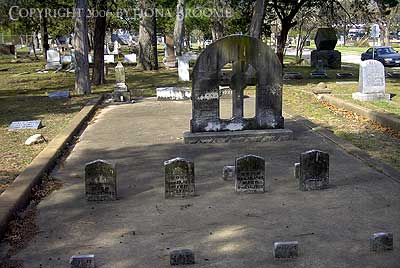 For example, these two shell-covered graves stand out at Oakwood Cemetery. 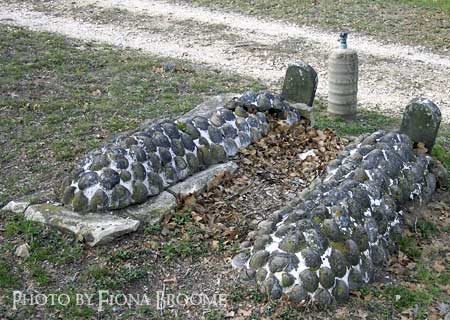 In the next photo: Many of the cemetery’s headstones are worth researching. Here’s one to look into, if you’re planning a trip to Oakwood.

When I was there, I noticed odd EMF spikes around this grave. That doesn’t mean it was haunted, but it’s unusual enough to investigate. 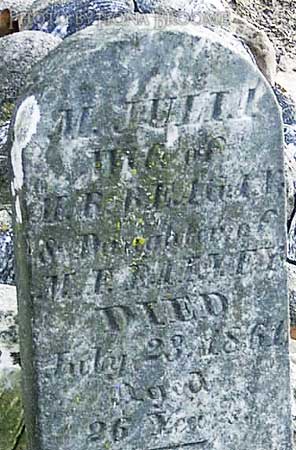 (Double-check the actual stone to be certain. The photo isn’t clear and I may be misreading it, especially her parent’s surname.)

I’d start with death records for that date, and also check the 1860 census. It looks like her husband died September 30, 1865, so that’s another lead you can pursue.

With the EMF spikes I saw around that exact grave, I’ll bet there’s a tragic story, and perhaps a ghost. 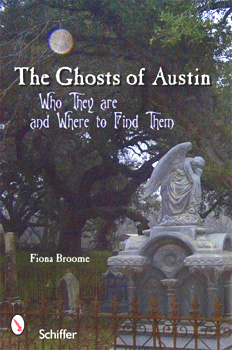 The Ghosts of Austin, Texas was written by Fiona Broome, the founder of HollowHill.com, one of the Internet’s earliest, largest, and most respected ghost-related websites.

This book shares locations and stories of over 100 ghosts and haunted places in Austin, as well as those within a few hours’ drive of Austin. Photos in the book include haunted sites in Austin, Columbus, and San Antonio, Texas.

Ms. Broome was one of the first to report hauntings related to Jack the Ripper’s early years in Texas. (Since Fiona’s book was published in 2007, many “ghost tours” have included those sites in their routes.)

Fiona also identifies paranormal patterns that link many of Austin’s most famous haunted places. With this information, you may find even more haunted sites in and near Austin. Fiona gives you the tools to make your own discoveries.

Fiona specializes in unreported and under-reported haunted places that are open to the public. She approaches ghost hunting from an historical viewpoint, verifying and documenting ghosts’ actual histories whenever possible.

This book doesn’t repeat the same old “ghost stories.” It’s a fascinating study of over 130 ghosts and haunted places in and near Austin, Texas.

This book includes true tales of ghostly encounters, street addresses of the haunted sites, helpful tips for ghost hunters, and eerie insights from “the other side.”

The Ghosts of Austin, Texas: Who the Ghosts Are and Where to Find Them, by Fiona Broome