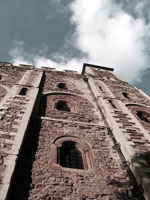 In a 2007 article for the Dallas News (now unavailable), Mary Ellen Botter talked about a Tower of London watchman who saw two ghostly figures.

When we encounter a ghost that’s not simply stored, residual energy, why do we assume that he or she is in our time?

Is it possible that we’re in a doorway – perhaps a vortex – and the “ghost” perceives us as spirits, too?

It seems like many ghosts have a specific reason to visit our world. For example, the spirit may have unfinished business. Or, the ghost may not realize that he or she has died, and is confused about what to do next.

But, some instances – particularly in profoundly haunted locations – where the fourth dimension of time seems transparent.

Or, maybe both the ghost and the modern-day observer are at a spot where each can see into each other’s universe or time. (If that sounds vague or confusing, keep in mind that this is just a glimmer of an idea.)

In an episode of the BBC TV show, Torchwood, the “Captain Jack Harkness” episode offers intriguing possibilities for ghost hunters.

What if we don’t assume that ghosts are dead people? What if we ask them to do something – leave a note, or move something specific – that we can find in our (later) time? (The movie, Kate and Leopold, is another example of this.)

I’m not sure what would be necessary to suspend disbelief enough to actually witness the change or find the note that was requested. (I’m reminded of the movie, Beetlejuice. In a book, the couple read that the living won’t see the dead.)

This may sound too fantastic. However, it’s important to explore every possible theory and avenue of research.

If you encounter a particularly vivid spirit that may actually be in his or her own time period, ask them to leave a sign for you to find.

If that works, I’d love to hear about it.