October is here, and so are articles that show a profound misunderstanding of what ghost hunters do.

I’m rather irked reading the insults in “Study links poor understanding of the physical world to religious and paranormal beliefs.”

Tarring all religions and paranormal beliefs with the same brush, the article –  based on a study by Marjaana Lindeman and Annika Svedholm-Häkkinen of the University of Helsinki – claims:

That list continues, but I think you get the point.

And, I know quite a few highly educated priests and professors who’d disagree with that correlation.

Oh, I’m not disputing the study results, just the sampling they used or the methods, or both.

It’s typical of the bias we deal with as researchers.

But, for every annoying article like that one, I find several news stories that intrigue me.

I started with an article about a haunted site in Pennsylvania. Then, I found a news article about a Connecticut ghost investigation. After that, I started connecting the dots – literally. In the explanation that follows, you’ll see how I use news stories and maps to find even more interesting places to investigate. 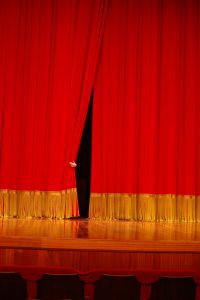 First, there’s the Casino Theater in Vandergrift, PA (USA). It’s opening for an investigation. The site’s history sounds like it’s worth a visit.

I mention them in my article, What Makes a Great Haunted Research Site.

Then there’s the Dr. Ashbel Woodward House Museum in Franklin, Connecticut. It used to be the home of a medical practice. Today, it’s a historical site.

A news story describes a recent investigation at the site. I’m not sure it’s very haunted, but it has the features I look for in a historical site that’s likely to have ghosts of some kind.

If you’re near Connecticut, the article – no longer online – was in the Norwich Bulletin. You may find a copy of it locally: Ghost hunters look for paranormal activity at Franklin museum.

About 15 minutes away, a “My Ghost Story” episode was filmed at 3 Boswell Avenue in nearby Norwich (CT). Apparently, some ghosts still linger. (The segment was “The Grim Rapper” from “I Am Full of Madness” that aired 14 May 2011.)  In the Norwich Bulletin, in an article titled TV show will explore ‘haunted’ home that drove man from Norwich.

If you want to see that actual Norwich site, remember it’s a private residence. Be discreet and respectful of their privacy.

The proximity of those two haunted locations makes it easy to draw a line between the two sites. In fact, any time I see two paranormal sites – especially haunted sites – near each other, I draw a line that connects them.

Then, I extend that line in both directions, and see where it leads me.

After reading about those two Connecticut haunts, I was eager to get to work. I’ve never been to Norwich, so I wasn’t sure what I’d find, but my “gut feeling” told me I’d find some great haunted places, nearby.

Then, I checked a few local landmarks that were on or near that line.

Immediately, I was drawn to Norwich’s Colonial Cemetery. That cemetery is closed, but the information online looks fascinating.

With three interesting haunts along one line, I knew I’d find more. So, I kept researching odd places close to the line.

Almost instantly, I found Norwich State Psychiatric Hospital, aka, Norwich State Hospital for the Insane. Several ghost hunters reported it as a terrifying place to investigate… when they could visit it.

As of 2016, this dangerous site – with demolished buildings and collapsed tunnels – is strictly off-limits and unsafe.

In addition, Norwich State Hospital looks like it’s over a mile away from the line.

Many researchers limit their ley lines widths to 12 feet. Others talk about lines as wide as 15 miles.

A few researchers insist that extreme weather, emerging fault lines, and other natural issues suggest that ley lines may be expanding, too.

Personally, I vary the width of the line with the location. That’s part common sense and part “gut feeling.”

In New Orleans’ French Quarter, the lines can be just a few feet wide. In other areas, I’ll expand them a few miles at the very most. My goal is to keep my lines as narrow and focused as possible.

So, I’m iffy about including Norwich State Hospital. If I had more time, I’d look for more ghost reports on or near the line. I’d judge the line width based on how many sites are nearby.

I might try some line variations, using the hospital as a starting point. That site’s ghost stories are certainly lurid.

But, at the moment, I’m not sure. And, I’m working on my next book. So, I’ll leave this ley line for others to explore and refine.

Nevertheless, this shows you how I use news stories and maps – plus some online research – to find and evaluate other sites that could be haunted.