Ghosts and a Camera at Halloween

In the northeast, Halloween can be sultry or freezing cold.

After dropping my son at a church youth social, I decided to return Blood Cemetery (aka Pine Hill Cemetery) in Hollis, NH.

I wanted to take some quick photos from the roadside.

(Like many New England cemeteries, Pine Hill is closed from dusk to dawn.)

I carried my “old reliable” 35mm point-and-shoot camera which I’d used for years.

I’d taken over 100 photos with it during the two weeks before this, and it had worked perfectly.

In fact, about half of my photos are taken in low-light conditions using the flash.

On this evening, the batteries were fresh, the film was fine, and there was nothing to jam the camera.

Since it was Halloween, I felt a little nervous as I approached the pitch dark graveyard. Its scary reputation didn’t bother me as much as being alone on a very deserted road.

Because the cemetery had closed at dusk, I stood at the side of the road, staring into the eerie darkness. And I started taking photos at random, pointing the camera into Blood Cemetery.

And then things went weird 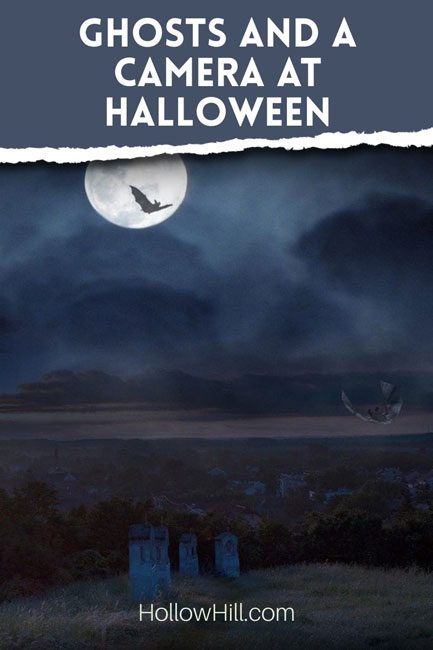 I pushed the button to take a photo.

Nothing happened. No flash, just the film advancing.

Click again. Still no flash, as I was using up film.

It took me eleven photos to realize that my flash was not going to work.

Then the police – who patrol the cemetery regularly at this time of year – arrived and asked me to “move along.”

(My team and I always respect laws, especially at haunted sites. And, when the police ask us to leave, we do so, immediately.)

I left, muttering to myself about my camera. Fresh film, fresh batteries, a good camera… why had it suddenly failed?

For the next few minutes, I went through a mental inventory of reasons why the flash had abruptly stopped working, for eleven photos in a row.

About two miles from the cemetery, I stopped at a red light. Figuring that I had nothing to lose, I picked up my camera and took a quick photo of… well, the car seat.

After all, it was right there.

I drove another ten minutes to another old cemetery. It was “Schoolhouse Cemetery,” the early burial ground next to Spit Brook Plaza shopping center.

But, at the time, that burial ground did not have a “haunted” reputation. (With lots of traffic on at least one side, and an apartment complex along one side, it’s not a great research location.)

There, I took another dozen photos to finish the roll of film, and the flash worked fine every time. (That’s the night when I photographed one of my best pictures of a ‘ghost orb’ at Schoolhouse Cemetery in Nashua, NH.)

Frankly, although it doesn’t feel that odd to me, I may have to accept that Blood Cemetery is, indeed, haunted. Abel Blood’s headstone is just one landmark among several local haunted cemeteries.

I’ve inspected my camera and batteries. Nothing seemed amiss.

Was the problem paranormal? Maybe. Even now, I have no reasonable explanation for the abrupt, location-specific failure of my camera.

I know that this sounds like a campfire tale from a Scouting trip. However, it’s what really happened.

I can’t think of a reasonable explanation. Not for eleven photos with a very reliable Olympus camera. The camera had worked fine for years before, and – as I update this story in 2020, over 20 years later – that camera has never failed since.

(However, other cameras have reacted weirdly at haunted cemeteries, too.)

Blood Cemetery seemed like a comfortable old graveyard before these experiences. But, it took me months to feel comfortable returning there.

Even today, I’m a little edgy about that cemetery.